Check out our list of 10 Thought Provoking and Challenging Books Middle Schoolers will LOVE to Read. These books are EXCELLENT reads that are both entertaining, informative and absolutely moving. The genres on our list vary from memoirs to historical fiction. Many of these titles are true stories like A Long Walk to Water or historical fiction based very closely on real events like Refugee.  Obviously there are all kinds of amazing books for Middle Schoolers, but our list is meant to be compelling reads for kids that also cover important topics from both a historical perspective along with recent current global events. Adults will love these titles too and they make for wonderful Parent Child Book Club picks. I’ve read all these books as have both my son and daughter. We loved discussing these books and they will widen your child’s world view, make for fabulous conversations, and encourage thought provoking discussions.

These titles are all relatively easy to read for middle age readers (Age 10 and up) but all introduce really serious topics and a bigger world view perspective.  I’d recommend them for your stronger readers who are in the later elementary grades and then all middle school aged kids in 6th-8th grade. The Alan Gratz titles are all page turners and both adults and kids are generally not able to put them down! And a handful of books on our list will likely bring you to tears too as they are so moving dealing with the Holocaust, Refugees, World Wars, and more.

I Will Always Write Back: How One Letter Changed Two Lives 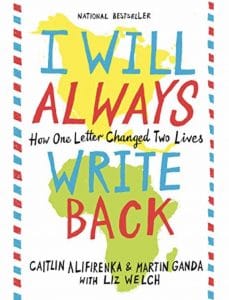 When Caitlin has an assignment to write a letter to a pen pal in another country, she chooses Zimbabwe, the most exotic and interesting place on her teacher’s whiteboard. Soon after, her letter ends up in the hands of Martin, a boy living in the impoverished country of Africa. Follow Caitlin and Martin in this wonderful memoir as they correspond letter by letter for 6 years,  while their friendship blossoms and they both discover things about everything from themselves to the world around them, and realize how they can each make an impact in the world in their own way. 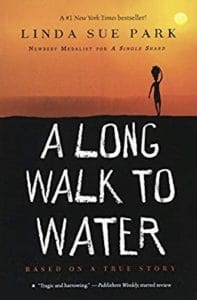 Learn about two eleven year olds in Sudan, a girl in 2008 and a boy in 1985, as they both conquer very different but just as difficult challenges. Nya in 2008 walks to collect water from a pond a two hour’s walk from her village every day, twice a day, and Salva in 1985 becomes a refugee who covers Africa’s continent by foot, conquering everything from armed rebels to killer crocodiles. Follow the true story of these two remarkable people and watch as their lives intersect in the most remarkable way.
Refugee by Alan Gratz 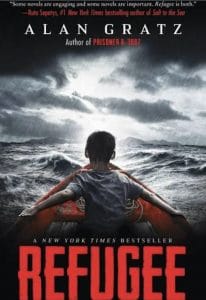 Ride along on three harrowing journeys with three different kids as they all are forced to go through horrible things to escape the current world around them. Josef, a Jewish boy in the 1930’s, boards a ship to flee the suppression and concentration camps of Nazi Germany. Isabel, a Cuban girl in 1994, sets off on a raft with her family in a desperate attempt to escape the riots and poverty attacking her community. And Mahmoud, a Syrian boy in 2015, sets off on a long trek across the continent in the hope of finding reprieve in Europe from the everyday violence and destruction plaguing his homeland. Although all the refugees face unimaginable dangers throughout their journeys, they all keep one thing that will lead, inspire, and connect them all in the end. Hope. 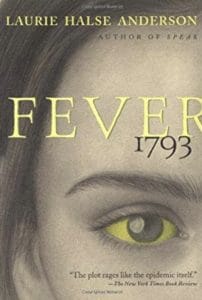 Mattie lives a relatively normal life in 1793 Philadelphia above her family’s coffee shop, avoiding chores and planning to  make the family business great. Until the fever breaks out. On her mother’s feverish pleas, Mattie flees the city with her grandfather, hoping to escape the epidemic, only to find that the fever is everywhere and Mattie must learn to survive in a country frantic with plague. 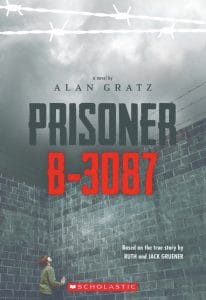 Follow the true story of Yanek, a Jewish boy in the 1930’s, as he makes his way from through ten concentration camps, where he witnesses unspeakable horrors and violence, but also surprising “glimpses of hope.”

Micheal is living during the height of World War II, and his dad is the Irish ambassador to Nazi Germany. But Micheal, like his family, is a spy. Micheal is forced to join the Hitler Youth, and despises everything that they stand for, but he must prove his loyalty to get crucial information for the British Secret Service about the Nazi’s new secret mission: Projekt 1065.

I Am Malala: How One Girl Stood Up for Education and Changed the World 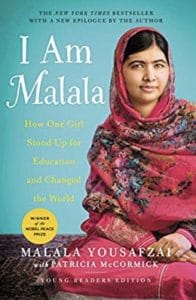 Follow Malala, a 16 year old girl in Pakistan in 2012, as she dares to speak out for girl’s rights and education, and almost pays the ultimate price for doing so: her life. But as she remarkably recovers, she continues to stand up for equality and justice for everyone, everywhere. 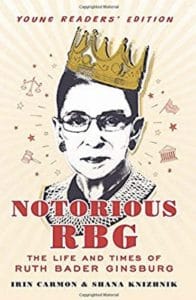 Follow RBG from Supreme Court Justice as she stands up for women’s rights and becomes an idol to millions. 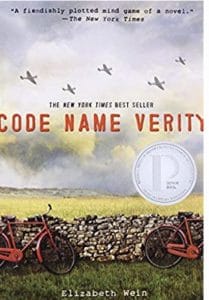 Read about two British pilots in 1943 – best friends. But when their plane crashes in Nazi-occupied France, only one of them has a chance to survive. And once “Verity” gets captured by the Gestapo, she is given a choice – tell them her mission or face a execution. In an intricately weaved confession, Verity reveals how she became best friends with her copilot Maddie, why she left her in their crashed plane, and her hope to make it home. But will her trading the truth be enough to save her life?

The Boy in Striped Pajamas 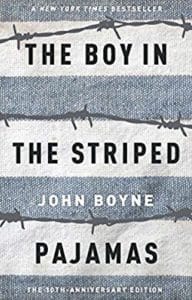 In Berlin, 1942, Bruno’s father was just promoted, and his family moved far away, with no one to play with and nothing to see but a tall fence stretching in every direction. One day, Bruno ventures beyond the fence and meets a boy his age in very different circumstances than his own, and their friendship and Bruno’s naïveté leads to devastating consequences.