I’m so excited to share more photos and details about our most AMAZING experience at the Rio 2 Movie Premiere and Concert After Party  in Miami at the Fontainebleau Hotel. Rio 2 releases in theaters everywhere on April 11th.  We saw all the movie stars arrive on the blue carpet and soaked up all the Rio vibe of the after party that celebrated the outstanding music from the film and showcased a world recording breaking performance of the Samba.

8 year old Kenzie tagged along with me on this trip making it an experience to remember forever. Check us out in 3D Rio 2 movie glasses! 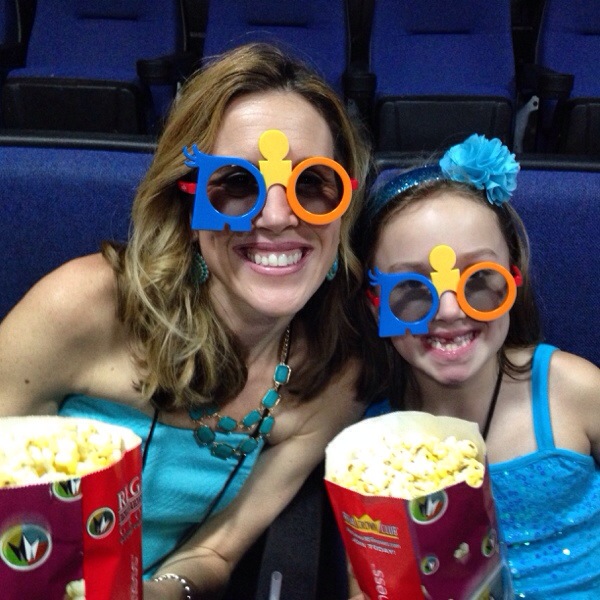 This was our very first traveling adventure with just the two of us girls so everything about the weekend was extra special. As a Mom, you are so often with all your children and/or orchestrating activities and events for an entire family,  and rarely do you get to connect with one child for an extended period of time.

Kenzie felt so special traveling solo with her Mom to this extraordinary Rio 2 movie premiere in Miami — and I was able to see everything through her perspective making each tidbit even more fabulous for me too!

You’ve gotta love the highlights a kid takes away from an event like this. Yes she was wowed by the gorgeous view in our hotel and the idea that celebrities were at the party, but her overall highlights that she tells people about when recapping the event this week – besides LOVING the movie, was that she saw a World Record BROKEN for the biggest SAMBA dance and that she was allowed to have her very OWN BAG OF POPCORN during the movie.

Yes, her very own bag of popcorn. V. happy she definitely still appreciates the little things!

Check out our reel of highlights from the Blue Carpet Rio 2 movie premiere and after party. So much fun – music, costumes, dancing and celebrities galore. 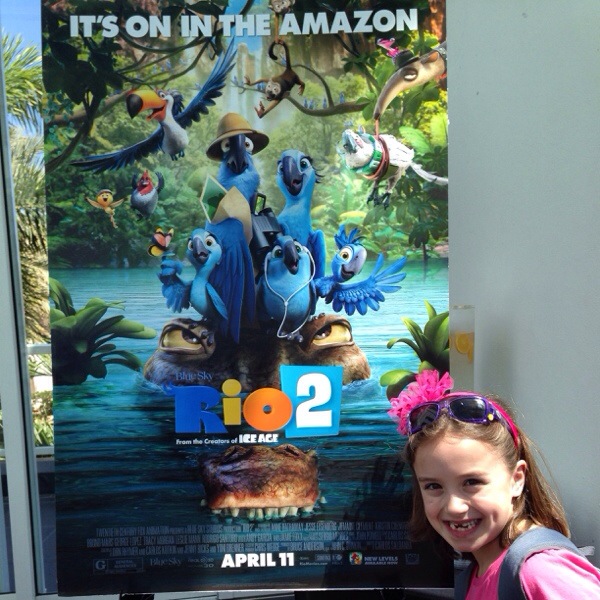 Here we are at arrival checking in at the media desk. Kenzie was ultra impressed with her very own BADGE and fancy movie tickets.

Both of us thought the fanfare the movie premiere was thrilling. The RIO 2 after party literally ROCKED with costumes, star studded appearances, and even a rock concert. Cool signage was everywhere with all the various characters from the film. We posed for photos around a ton of them! Check out all these Samba dancers bringing the spirit of the Amazon and Carnival to the party. We loved the costumes – bright, colorful, all kinds of feathers and all kinds of skimpy. Look at these ladies ABS! 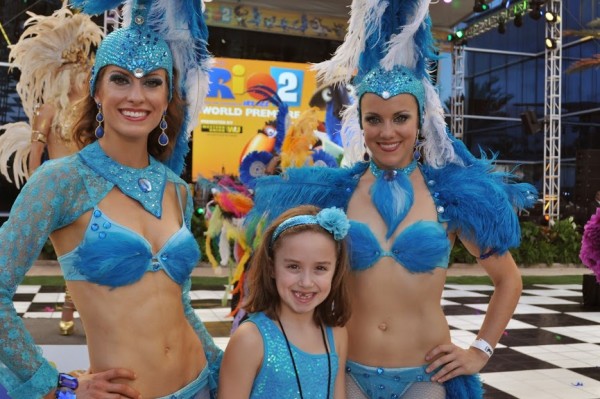 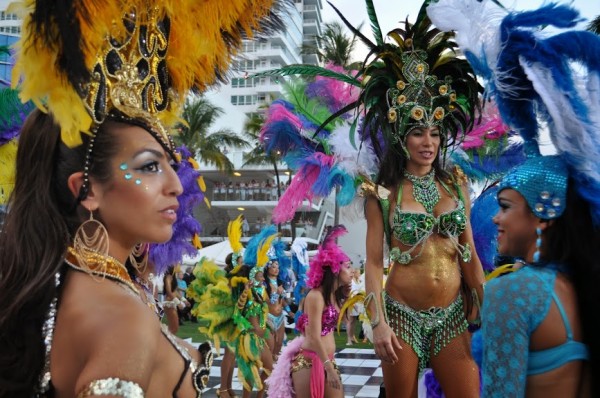 A selfie we took with another dancer! Relaxing on these gorgeous white couches they had scattered along the Ocean Lawn at the Fontainebleau Hotel where the Rio 2 premiere party and concert took place. 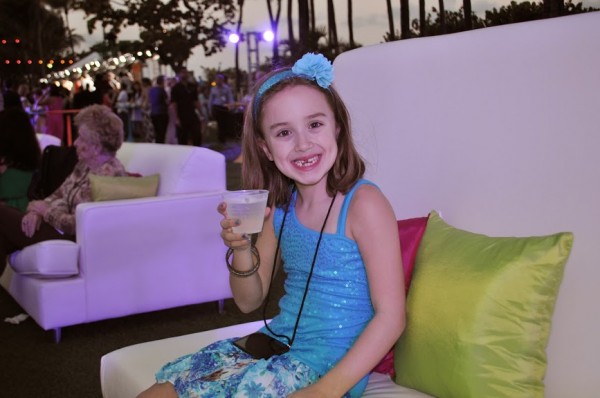 Together we had a weekend to remember forever.

My new friend Jeanne, a Mom blogger at InsideOutMotherhood.com, whom I met at the Rio 2 premiere captured this photo of Kenzie during the party.

Note Kenzie savoring every moment of the festivities as she is trying to record and film on an extra phone we let her borrow to use for the weekend. I love it!

It’s incredible to see how this little person is now my most perfect companion and friend. Honestly, we share so many of the same interests. Our personalities are very different, but at age 8, it’s fascinating to see my daughter evolve into a mini me in many facets of her own life.

It’s not something I ever expected and it’s been such a joy these past few years to see my little girl become old enough to share so many of my own passions – from movies we watch together, to her being a total bookworm like me to her love of the swim team which I had at age 8 as well, to her now being able to run as fast as me and actually go for 2 mile runs with me!

And it looks like she’s obviously also caught my social media and blogging bug.  My friend, Leticica from Tech Savvy Mama, snapped this really cool photo of me filming Kenzie when she gave her intro to her Rio 2 premiere. Isn’t that another neat photo? 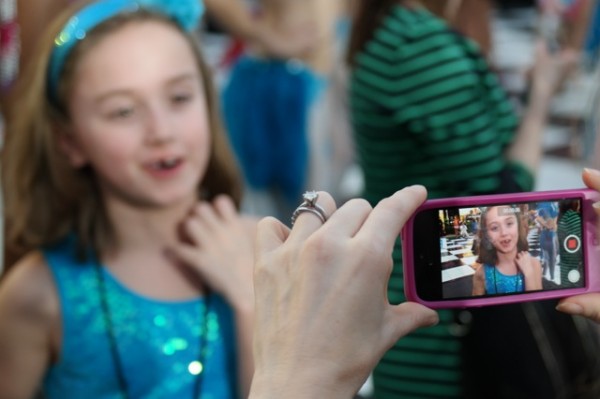 Celebrity Photos from the Rio 2 Premiere

As you can tell, Kenzie and I were trying to grab our own celeb photos during the blue carpet arrivals and dance concert. We were both very excited about Anne Hathaway, who voices Jewel in Rio 2 and also played Mia in the beloved Princess Diaries series, so Kenzie was very familiar with her. Check out her huge heels! She looked totally gorgeous, stunning and every inch the movie star. I loved Jamie Foxx. He was a real entertainer hosting the concert for the evening  and pumping up the crowd. Truly he was awesome. 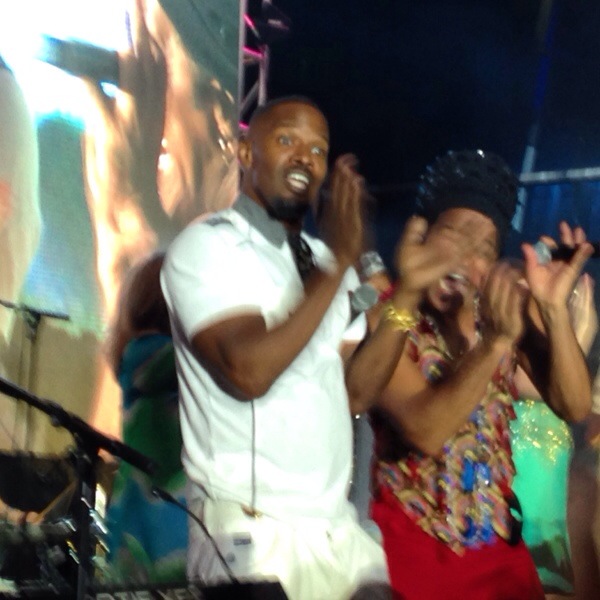 Kristin Chenoweth, the voice of Gabi, looked tiny and adorable as always and was incredibly charming with the guests at the party. Check out this GIANT Blu figure. It’s actually made entirely out of fruit roll ups. We thought it was so cool and let me tell you – it smelled delish! Blu and Jewel are back for an all new adventure in Rio 2! 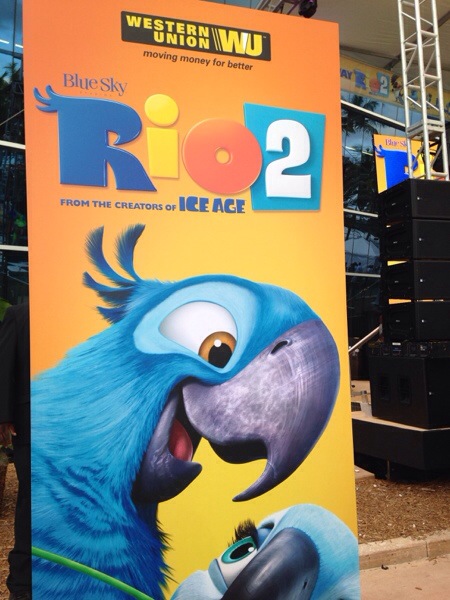 Note: Our travel expenses were paid for by 20th Century Fox. As always, all thoughts and opinions are our own.