Last week in Santa Monica I had the chance to sit down with Drew Barrymore and John Krasinski to get the inside scoop on their experience filming the  movie Big Miracle in Alaska. This inspirational movie is based on the true story about the rescue of 3 whales trapped under  Arctic ice in 1988. It’s a fabulous feel good movie that I highly recommend – it will leave Moms & Kids alike feeling inspired that they can make a difference.

Both Drew and John could not have been more real or down to earth. There was no “diva” in the air from either of them.

Drew spilled on her love of snail mail, hot yoga, and cozy sweatpants. Love it! Here’s a quick shot we were able to take with Drew & John after our Parent Blogger roundtable interview ended. Aren’t they both so adorable?  And yes Drew’s brand new engagement ring was beyond gigantic and super sparkly – but that was truly the only “fancy” thing about her. 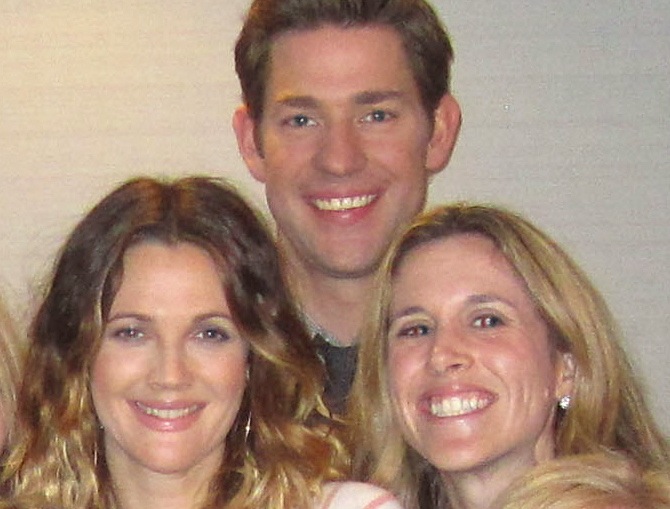 As for John Krasinski – he is literally the “guy next door” and I felt like he just personified his role as “Jim” from the Office in person. Super funny, friendly, quietly cool & confident, and seemed like he could easily be your closest buddy after only a 15 minute conversation.

My best friend from college actually went to high school with John – and her sister even went to Brown with him. So at the end of our interview, I was able to make a connection with him and relay a “hello” from my friends. He was super excited to hear I knew his old high school & college comrades and wanted to hear all about how they were doing. Given his fame,  I’m sure he often gets the “do you remember so and so” game from strangers, but he could not have been more genuine in his inquiries and memories about my friends. John even admitted to once being in love with my friend’s sister in high school. This was too funny but I’m sure very true as she is super adorable and every boy always had a crush on her!

Very sweet and John certainly won me over with his boy next door personality.

Big Miracle opens in theaters on February 3rd, 2012 and here’s some of my favorite tidbits from our conversation with these lovely superstars.

John and Drew’s thoughts on filming in Alaska

Ms. Drew Barrymore:  I just like slowing down up there.  There’s just only so much to do on another level.  And you get really quiet, and you go to work, and I would do some hot yoga at night.

Then, there would be some poker.  And we all lived on the same floor, so it was very dormitory, and it was just–.

Ms. Drew Barrymore:  And I got a lot of letters from my friends because I tend to shut down when I’m doing parts as an actor and just want to not email, not be on the cell phone.  And it’s a great excuse for me to say, “I’ll see you in three months.”  But, if we want to write letters, here’s the address.  And it’s a full tilt snail mail campaign.

Ms. Drew Barrymore:  So, it added to the camp element, because it would be dear such-and-such–

Mr. John Krasinski:  Yes, she made me write letters to her.  I couldn’t talk to her directly until now, actually.

Question: Did you explore Alaska while filming?

Mr. John Krasinski:  I did.  I went up to Fairbanks, Alaska and it’s kind of like the Jetson’s.  Everybody has these little planes because it’s the only way to get around Alaska.

And so, while we were shooting, there were hundreds of planes flying around.

Ms. Drew Barrymore:  So many.

Mr. John Krasinski:  So, we went up to Fairbanks.  I had a day off, and I just wanted to see another place, and I went up to Fairbanks with Ted Danson, Rob Riggle and Ted’s wife Mary.  And we went to these hot springs that were 115, 120 degrees in the middle of below temperatures in a snowstorm.  That was totally surreal and a fantasy of mine, so check, done. 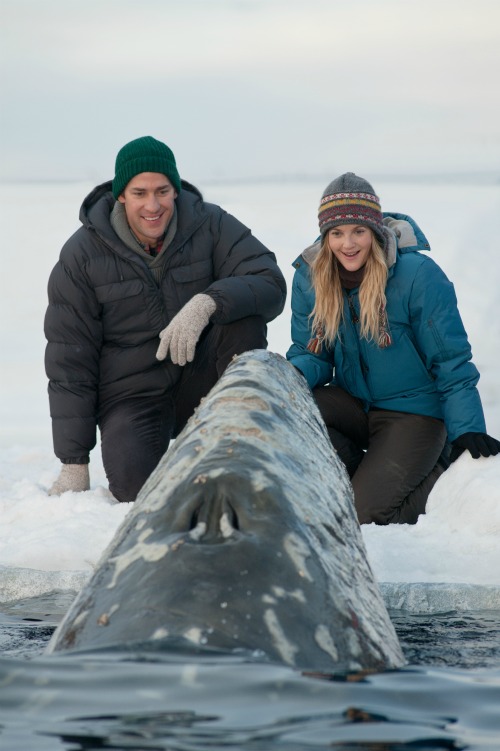 Drew’s thoughts on filming the “underwater scene” with the whales -which were actually gigantic life like animatronic whales – think robotic puppets the size of real whales. She actually had to jump into a freezing cold seal tank for this footage.

Question: Can you talk about jumping in the cold water?

It was so cold.

Freezing, freezing, but just wonderful.  Again, it’s that sort of conviction where you’re like I just want to do it, please let me do it.  I think they were afraid the conditions were too bad.

And so, they want to sort of be nice to you and not have you do it, and they talk about how they’ll do it in post-production.  And I said, “no, please,” let me do this.

Well, Ken, our director, again, he wanted us to be in Alaska, and he wanted to make sure that the whales looked and felt real.  I mean, it’s in the room.  It’s not like CGI where it’s added in later, these whales.  It’s authentic.  They’re really there.

And the same with stuff like getting to scuba dive, I was so game and just wanted to do it so badly.

It’s funny, when you do stunts or you do anything like that, they say, well, we’re gonna bring in a double, and you’re like, no, you’re not.  I have to do that.

They were talking about a double, and I thought, no, no, please no.  So, I think you end up sort of begging to do something just because you really want to be the person that gets to do it

Drew’s thoughts on me telling her she seemed so real:

Ms. Drew Barrymore:  Thank you.  And I like to play dress up, you know?  Sometimes, I want to wear all pink and put on a lot of makeup and then, sometimes, it’s sweat pants.  I don’t think there’s anything more that I value than my sweatpants. I just like being at home and being cozy.

Want to donate to a good cause?

Brush up on your whale facts by visiting the Big Miracle Infographic. Plus check out the very special Twitter Sweepstakes featured within where 100 randomly selected Twitterers who follow @UniversalPics and include the hashtag #everybodyloveswhales will win a Big Miracle T-shirt!

BIG MIRACLE is now on Pinterest! Check out the film’s boards at http://pinterest.com/bigmiracle PLUS take time to enter the BIG MIRACLE “Pin To Win” Sweepstakes for a chance to win FUN prizes. Find out more details at: http://on.fb.me/Af2jg9

Disclosure: Thanks to Universal Pictures for paying for my travel expenses for this lovely stay in Santa Monica to attend the Big Miracle Press junket. As always, all thoughts and opinions are my own.

8 thoughts on “Behind the Scenes: Life on the set of Big Miracle with Drew Barrymore”