Here’s the scoop of my day behind the scenes of How To Train Your Dragon 2 at DreamWorks Animation. I knew the moment I stepped onto the DreamWorks Campus in Glendale, CA that I was somewhere special.  Highly manicured lawns, gorgeous fountains, a gourmet commissary, and possibly most striking of all, really happy employees.  “It’s a normal job,” I said to someone helping our group.  “As in, it becomes mundane like everything else after a while, right?”  “Nope,” I was told.  “This place truly is amazing.”  It was obvious to see how so much inspiration, enthusiasm and success could be generated from this very spot. 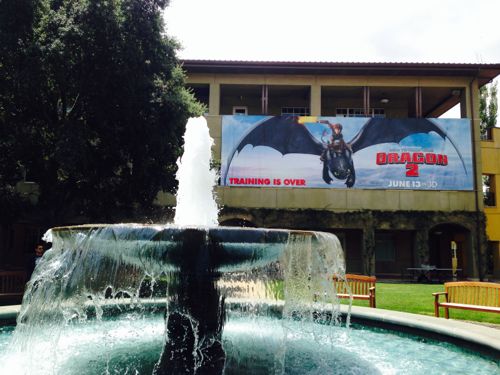 My press group was there to screen “How To Train Your Dragon 2,” the thrilling second chapter of the epic “Dragon” trilogy.  We were also going to see how the movie came together through interviews, simulations, demonstrations and even a once in a lifetime hands on animation tutorial. 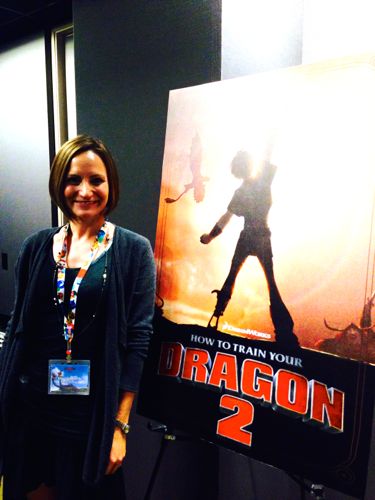 HOW TO TRAIN YOUR DRAGON 2 SCREENING:

First stop on our tour was a screening of “How To Train Your Dragon 2.”  Incredibly, we were the first media group to see it following its debut at Cannes the week before.  The story, which brings us back to the fantastical world of Hiccup and Toothless five years after the two have successfully united dragons and vikings on the island of Berk, is one of family, friendship and self discovery.  My first impression was amazement at how real some of the scenes looked.  For example, when the characters take flight over the water, it’s hard to tell whether you’re looking at an animated or a real scene.  As I later discovered, that’s partly because of Apollo, a brand new technology which accomplishes a look never been attempted before.  The soundtrack, by composer John Powell,  is incredible as are the characters, voiced by Jay Baruchel, Gerard Butler, America Ferrara, Jonah Hill, Christopher Mintz-Plasse, Craig Ferguson, Kristen Wiig, and T.J. Miller.  My one disappointment was that my kids weren’t there to see it with me as I know they’re going to love it, but they’ll get their chance soon enough! 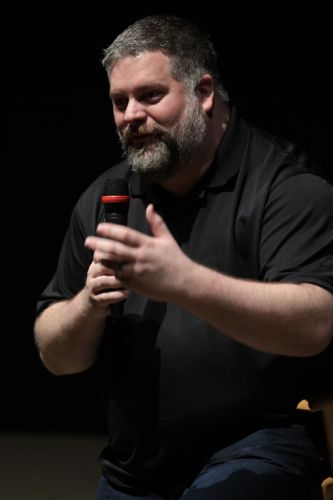 After the screening, we had the honor of holding a Q&A with Director, Dean DeBlois.  He was friendly, gregarious and open to every topic from the films’ audience to the new technology.

Q: How many animators are involved with one movie?

A: I would say it varies between about 30 and 40 animators. And when it gets really down to it, those last couple of months when we’re trying to finish the movie, we might borrow a few animators just to finish.  So, they can get up to 50 folks.  But 30 is a good number I think.

Q: This movie could be scary for little ones. I’m not sure I would take my 3 year old.

A: Yes.  I think there’s probably you know an appropriate age for the movie.  And three seems a little young.  But the books sort inspired the world.  We kind of kept the spirit of the books.  We kept some of the character names.  But in the first film, they had spent the first couple of years trying to do a fairly faithful adaptation to Cressida Cowell’s first book.  But the story itself was a little small and a little young.  And so, Chris Sanders [Director] and I were charged with kind of reinventing sort of taking it bigger in a more action adventure kind of way.

Q: Did you always plan for three movies?

And I was approached about that.  My pitch back was that rather than just do a sequel, which too often sequels just feel a bit unnecessary.  They’re either recycling material, or they feel kind of random and inconsequential.  I was inspired by the idea of it becoming a trilogy, so that the first movie would serve as the first act.  And this second movie is the second act.  And there will be a third and conclusive act to complete the story, complete Hiccup’s coming of age.  So, it actually takes three to four years to make an animated movie.  And we got started right away.  And now we’re finishing.  That’s actually how long it takes.

Q: Can you talk about the new animation software, Apollo?

A: You know the thing that Apollo does is it allows the animators to follow their intuition.  So, they now work like stop-motion animators working with a puppet, pushing around the clay, you know making a key frame and moving on.  It doesn’t necessarily make the process that much faster, what it does is it allows them to go back into it and refine it.  And they have so many more controls under the skin than they used to have.

Q: Since children are the main audience for this, is that why you thought it was important to have the theme of loyalty and leadership?

A: I try to make the movie that I want to see or that I would have liked to have seen when I was 10 and that I would love to see now.  There are examples of movies out there like that.  And for me, The Empire Strikes Back was the ultimate one.  Not only is it the best sequel I can think of, but it spoke to such a broad audience.  And I think that’s what we’re doing here.  We’re trying to make like a true four-quadrant that movie that speaks to the adults as much as the youngsters.  So, I always feel like it’s a bit of a mistake to consider it just a children’s movie.  We always try to entertain everyone in the audience, but not alienate or leave behind the kids.  And I think an aspirational hero is a big part of that.

SIMULATION EXPERIENCE FLYING ONE OF THE DRAGONS:

Next our group was taken to a flying simulator, which looked like a ride straight out of Disney World.  We sat on a motorcycle type seat and put on special 3-D head gear.  Looking into the lense, it appeared as through you were flying over the ocean on one of the dragons.  When you glanced side to side or up and down, you could see more from that angle as if you were actually a part of that world.  Filmmakers actually spent time on these simulators to see how it would look and feel to take flight aboard a dragon.  I was so excited to see what this thing could do that I immediately began making the dragon swoop down onto the waves, take tight turns, and purposely come close to banging into things.  The result was a combination of enjoyment and sea sickness. 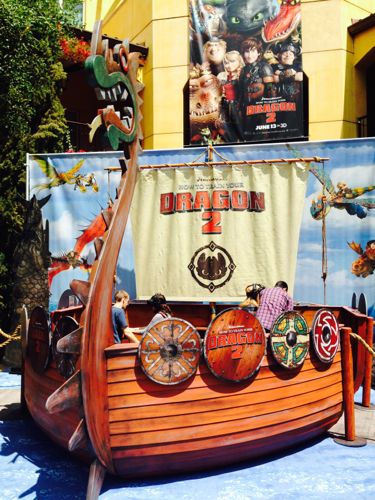 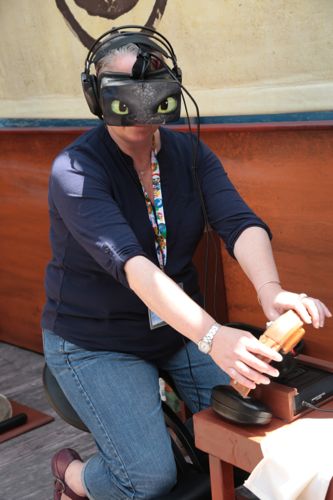 I had always wondered how animators were able to make the characters appear so real.  What I discovered through our next demo, was that actors take part in motion capture sessions in which their movements are directly mimicked by the characters on screen. 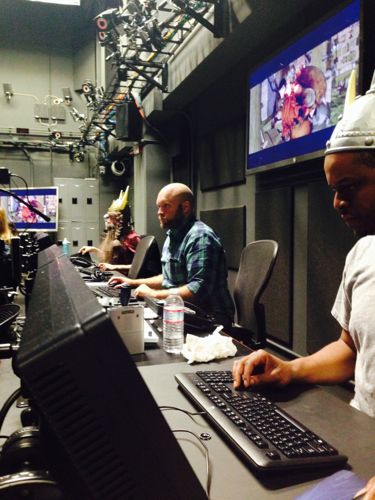 For the final hands on portion of the day, our group was led into a graphics room and told to sit down next to a computer.  To our amazement, after a short introduction, we were allowed to take hold of the PC pen and through a series of steps, make the character on the screen pick up a glass and take a drink.  This technology allows for incredible detail.  After swiping my pen around my characters face a few times, I realized that I could manipulate his expression and eventually, his entire look… but maybe not for the better. 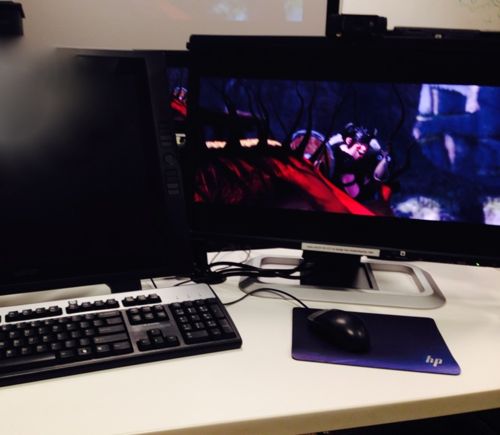 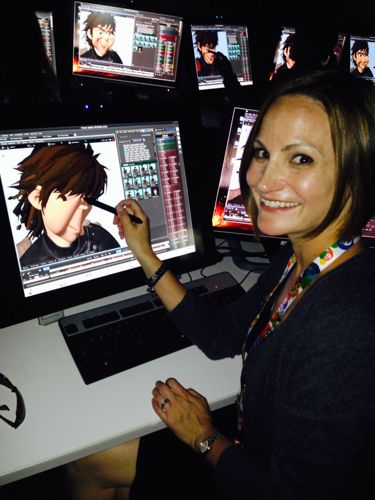 Not many of us think about the importance of lighting in an animated movie, but as I discovered, Dragon has 39 sequences, each of which required a lighting scenario.  When you watch the movie, pay attention to the reflections, shadows and icebergs.  It’s pretty incredible to think there’s a team in charge of each glimmer. “We had a lot of fun, as you can tell.  Working on a film like How to Train Your Dragon 2 is amazing, because you’re basically handed the biggest box of crayons you’ve ever had in your life, right, and then say go have fun and make this amazing movie.”

“It’s a big summer movie.  Because it’s an animated movie, we didn’t want it to be small or fail in comparison with the live action movies.  We wanted to have fun. We wanted to have it be this roller coaster ride with huge effects, magnificent vistas, everything else that you can possibly imagine.”

“We play with the ice.  We play with fire, water, everything else that basically puts you in that world.  You don’t question it.  You’re in there.  And you believe that Hiccup and Toothless are embarking on this gigantic adventure.  And you’re in for the ride and its visuals and things that you haven’t seen before.”

Check out the trailer and be sure to see How To Train Your Dragon 2 when it hits theatres June 13! 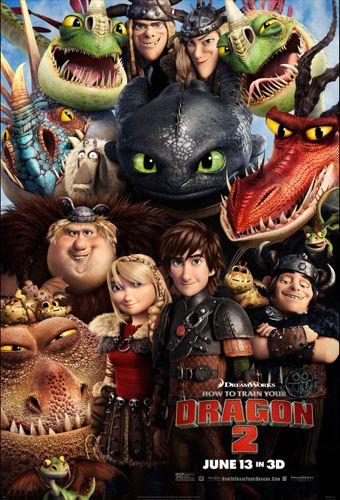 Note: Thanks to DreamWorks Animation for including the ClassyMommy team access to this special press day experience.As always, all thoughts and opinions are our own.