Attending the Space Warriors premiere at Space Camp and the U.S. Rocket Center in Alabama to cover red carpet interviews for Walmart is definitely one of the coolest projects that ClassyMommy has ever been assigned. 7 year old Kenzie joined me for our red carpet interviews with the cast too. She found this thrilling and she was adorable. I’m so proud of her confidence to join me in the interviews and her willingness to try new things.

Here is a super neat 1 minute video that the Walmart team made to share our experience with their fans and followers. I love how it turned out!


Coincidentally, the premiere was on the official “Take Your Child to Work” day – I think Kenzie and Kyle definitely just experienced the coolest day they’ll ever have at work with Mom given our day at Space Camp topped off with the Space Warriors premiere. Here’s Kenzie and I filming our intro’s. 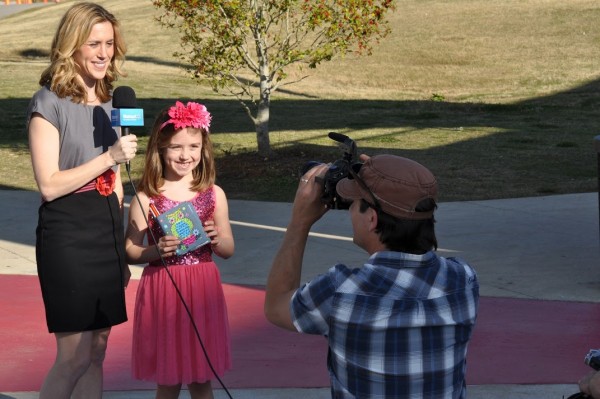 7 year old Kenzie was very excited about using a microphone -and her razzle dazzle notebook was a hit with the cast too. 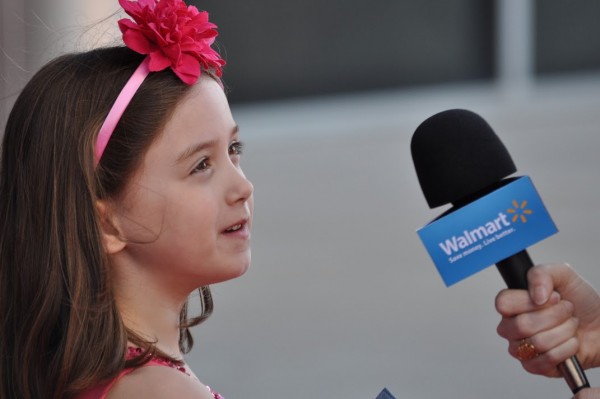 While Kenzie and I were busy filming, Mike and little Kyle – who was decked out in his flight suit, were hanging out with the fun easy going cast. 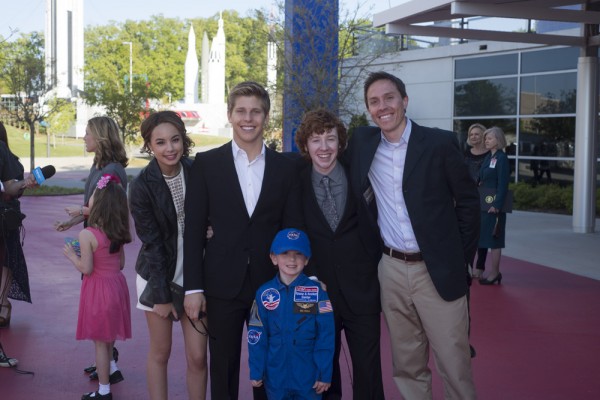 Child actors and actresses were fabulous to interview as they were more than happy to hang out with us to chat and share their experience filming the movie and other fun tidbits with us – like how they all enrolled in Space Camp before filming so they could get a real sense of what it was like to truly be a camper. 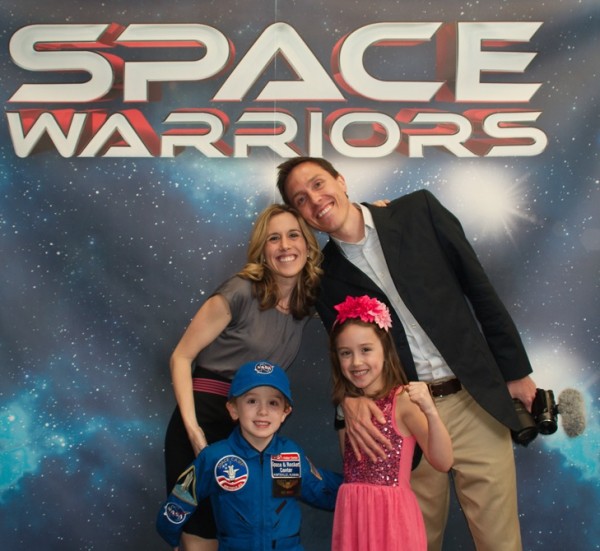 The whole family came with me so we could experience the premiere and Space Camp together which made this trip beyond awesome. I love the commitment to families that Walmart and Walden Family Theater showcase. This is my fave family photo of all 4 of us from the trip.

I talked about our cool in depth behind the scenes tour of Space Camp here. Seeing everything in real life before seeing the movie was very cool as we had a great background knowledge of about all the training, missions, and layout of Space Camp. The kids were wild about their official space camp “flight suits” and also thrilled to ride the mini space shot ride again and again all afternoon! 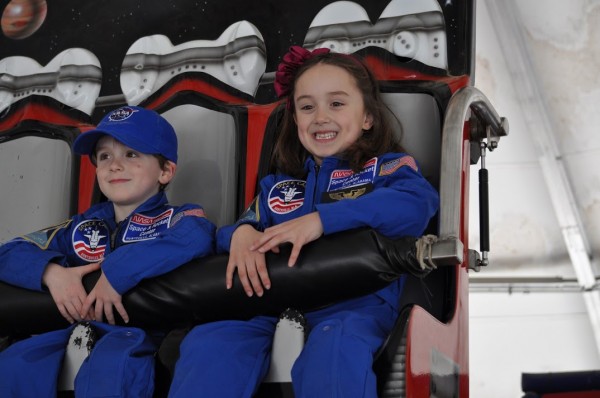 Kenzie was especially thrilled to meet Grayson Russell, who also stars in the Diary of a Wimpy Kid movies. Right now, the Wimpy Kid books are Kenzie’s favorite series so she thought meeting him was extra special. I adored Grayson too as he was a real “southern” gentleman and super outgoing. 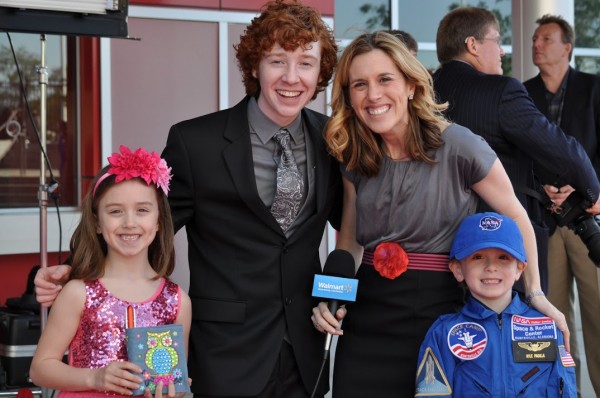 Posing with Thomas Horn, an extraordinary and articulate young actor. At age 15, he is the main lead star in Space Warriors and he previously starred in the acclaimed 2011 film, Extremely Loud and Incredibly Close with Tom Hanks and Sandra Bullock. I am going to be super excited to follow his career in the years to come. 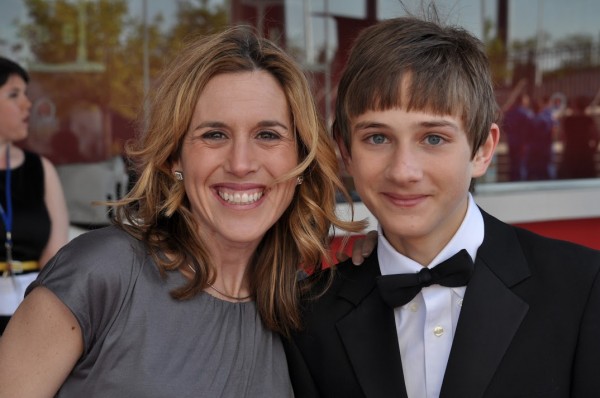 All of us were even able to go into the replica space shuttles and check out all the switches and buttons in the pilot’s seat of the orbiter. Ryan Simpkins, who plays Lacey, a Space Camper and Pilot  in Space Warriors, joined us for our backstage Space Camp Tour. We all loved her insight about filming scenes in the shuttle and it was fun to see her reliving all her memories of being on set last summer.  This young cast is super talented and so down to earth. I can’t wait to follow all of their individual careers in the years to come after meeting everyone. 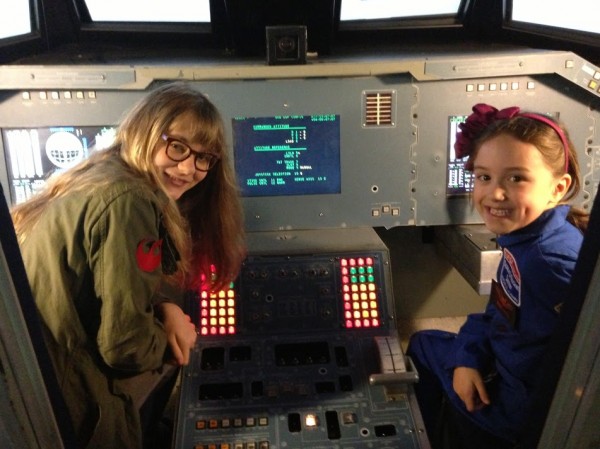 The kids were crazy about the Space Warriors movie and I loved it too. It’s a great family film that everyone will enjoy. Wholesome and inspirational with lots about team building and dreaming big. I also think this movie is so important for both adults and children as the “Space” element is extremely interesting and will hopefully encourage younger children today to focus on a career in the space industries and motivate them to excel in science, math, and learn more about the universe beyond life on earth as mankind continues to aim for the stars. 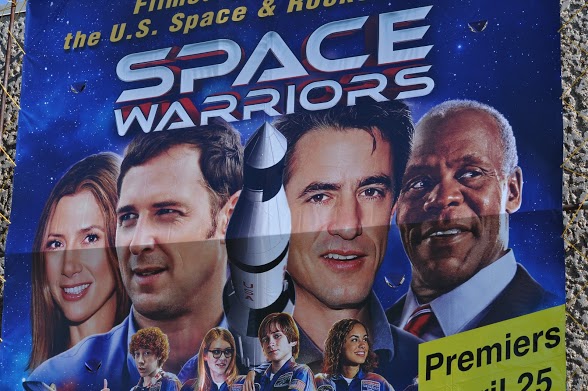 Note: This post is sponsored by Walmart. A big thanks to Walmart & Walden Family theater for paying our travel expenses to cover the Space Warriors premiere. As always, all thoughts and opinions are our own.

29 thoughts on “Behind the Scenes: Red Carpet Interviews at the Space Warriors Movie Premiere”