OMG! Check out  my Captain Marvel Set Visit Photos with The Mind Fracker!!!! Visiting the set of CAPTAIN MARVEL was absolutely EPIC! I’ve had to keep the details on this amazing set tour secret for 10 months ! Since, the movie opens tomorrow March 8th, I can finally spill the behind the scenes fun.  Last spring, when I was in LA for the AVENGERS INFINITY WAR movie premiere, we spent a few hours before the premiere actually on the live set of CAPTAIN MARVEL while they were filming! CRAZY!!!!!!! I am desperate to go see the movie this weekend with the kids!

Being on a live movie set & playing with the props was beyond amazing. I still can’t believe this happened to me!!! My kids are just a little bit jealous!! Every little detail was incredible and now that the trailers and movie posters are all revealed 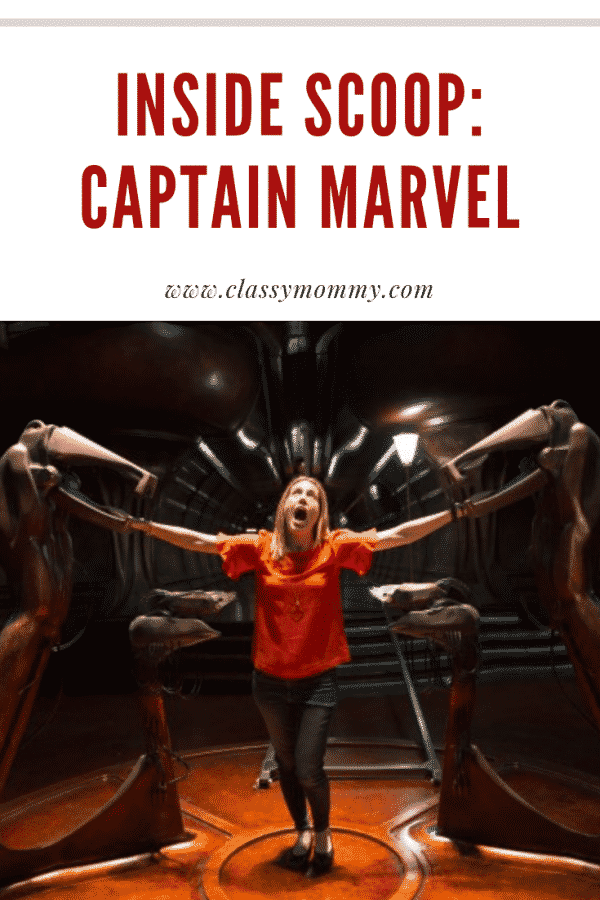 – We went in the Skrull Ship and posed in the Mind Fracker!

– We toured the Costume Trailer and saw all of Brie Larson’s costumes from her 90’s clothing to her Captain Marvel threads. Did you know they have duplicates of everything as sometimes the costumes need to look worn and dirty and other times that very same outfit needs to be looking brand new depending on what scene they are filming!  I even saw and touched Stan Lee’s costume as they had already filmed his classic Marvel cameo scene early on in the filming of Captain Marvel.

– We touched and posed with Kree & Skrull blasters plus I held the Tesseract!

– We met Samuel Jackson, Brie Larson & even Goose the cat after watching them film a scene together

The Skrull Ship and Mind Fracker

Here I am in the Skrull ship re-enacting that Mind Fracker scene.  I know….I’m not actually upside down for my photo opportunity so I’m only being partially tortured for all my memories!

The Skrull ship was housed in a giant warehouse on set. When you see it in real life, much of the ship is actually unfinished because they only need to finish what you’ll see by way of the camera. So there an open ceiling above me when I was in the Mind Fracker. Also, the ship is mostly made out of giant FOAM as this is easier to manipulate and carve to give it that smooth curved spaceship look. Also, foam is far lighter to move for the crew when they need to mix things up for different shots! 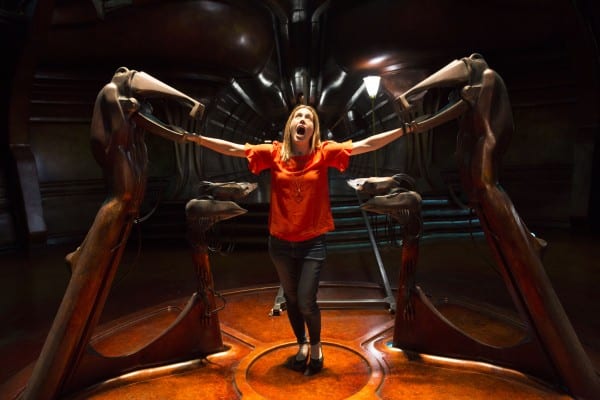 Check out these weapons! We learned they make various versions of each blaster …. some are heavier because they function more and light up etc, while others are very lightweight to make it easier on the cast! 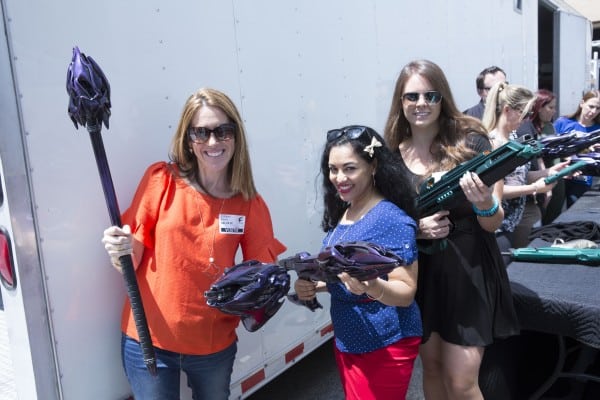 Fury & Carol Danvers had to film this scene we watched OVER and OVER and OVER  again in the cockpit of her ship to get Goose to make all the right moves & meows! The cat kept crawling on the dashboard of the ship and blocking Carol’s view. Very funny! Goose has his own cat trainer there with him that tried to encourage all the right moves. Apparently, Brie Larson is allergic to cats too so they really needed to limit her exposure, so we were lucky to be on set the same day as Goose! 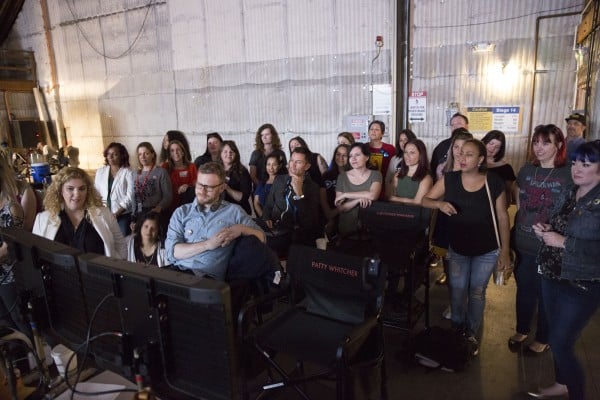 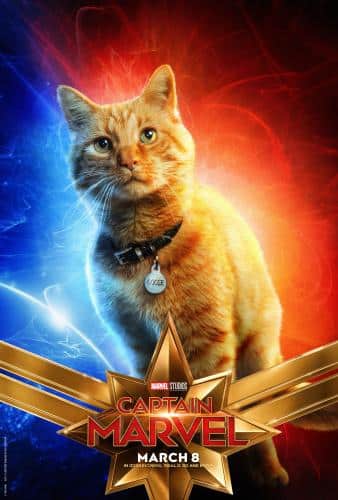 Here we are with Samuel Jackson, Goose, and Brie Larson. What a day! 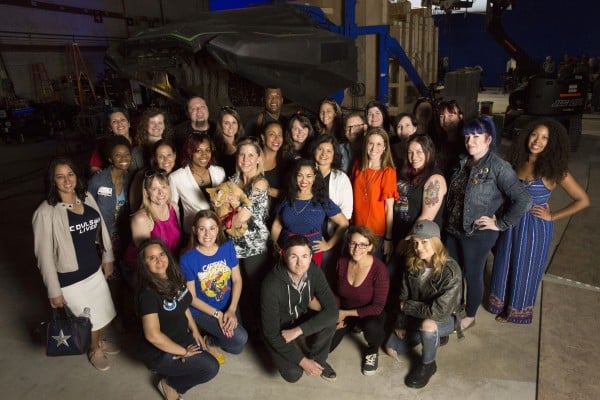 Set in the 1990s, Marvel Studios’ CAPTAIN MARVEL is an all-new adventure from a previously unseen period in the history of the Marvel Cinematic Universe that follows the journey of Carol Danvers as she becomes one of the universe’s most powerful heroes. While a galactic war between two alien races reaches Earth, Danvers finds herself and a small cadre of allies at the center of the maelstrom. The film stars Brie Larson, Samuel L. Jackson, Ben Mendelsohn, Djimon Hounsou, Lee Pace, Lashana Lynch, Gemma Chan, Rune Temte, Algenis Perez Soto, Mckenna Grace, with Annette Bening, with Clark Gregg, and Jude Law.

Marvel Studios’ CAPTAIN MARVEL is produced by Kevin Feige and directed by Anna Boden and Ryan Fleck. Louis D’Esposito, Victoria Alonso, Jonathan Schwartz, Patricia Whitcher and Stan Lee are the executive producers. The story is by Nicole Perlman and Joe Shrapnel & Anna Waterhouse, and the screenplay is by Anna Boden & Ryan Fleck and Geneva Robertson-Dworet and Jac Schaeffer.


Get Social with Captain Marvel