Check out these interesting statistics from a the recent survey by Children’s Advil.

Pfizer Consumer Healthcare, makers of Children’s Advil® , conducted two new surveys of more than  1,000 parents and 250 pediatricians nationwide and found that more than half of consumers (52 percent) report feeling anxious, fearful or helpless when their child comes down with a fever.

Do Parents Really Know Best?
Unintended Fever Mistakes
 More than half of parents (52 percent) have sent their kids back to school or daycare less than 24 hours after their fever passed.
 More than half of parents (54 percent) report waking their sick child up in the middle of the night just to give them fever medicine.
 One in five parents (17 percent) admitted to bringing their child to the emergency room solely for a fever without first calling their pediatrician. 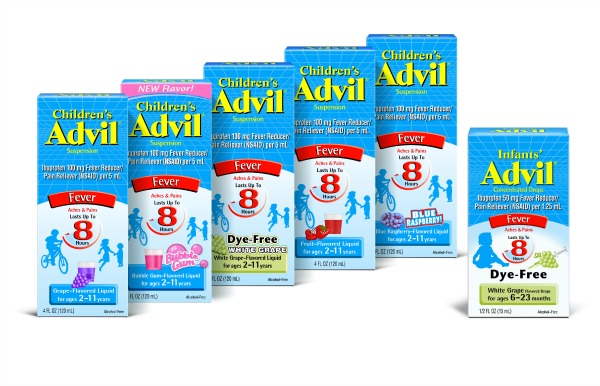 Common Medication Missteps
 Nearly a quarter of parents (23 percent) admit to giving their child an adult over-the-counter medication at a lower dose to treat their fevers.
 More than one third of parents (36 percent) base their dose on age rather than weight, which is the preferred method by doctors.

Moms vs. Dads: Differences in Fever Treatment
 While less than one third (32 percent) of all parents feel confident in treating a child’s fever, more dads (41 percent) report feeling confident than moms (25 percent) when kids develop fevers.
 A quarter of dads (25 percent) report giving their kids adult medication, whereas one fifth of moms (21 percent) admit to giving their children adult over-the-counter fever medication to treat a fever.
 More dads (57 percent) have sent their kids to school or day care less than 24 hours of a fever breaking compared to moms (48 percent).
 More moms (65 percent) determine the proper dose of medication for their child – based primarily on weight, not age – as opposed to dads (50 percent).

What Pediatricians Have to Say: Pediatricians Confirm Parents Misperceptions
 The overwhelming majority of pediatricians (94 percent) feel that their parent population needs more education on fever management. They consider parents to be either somewhat or not very knowledgeable.
 Almost half of pediatricians (44 percent) claim that they receive the most fever-related calls inJanuary.
 One third of pediatricians estimate that up to half of their patient’s parents (26-50 percent) have taken their child to the emergency room due to a fever before calling them.
 Nearly three-quarters of pediatricians (72 percent) state that they often hear that parents sendtheir children back to school or daycare less than 24 hours following their fever.

About the Surveys
Data was collected from two national surveys: a survey of 1,026 parents of children ages 12 years and  younger conducted by Harris Interactive Research; and a survey of 252 pediatricians conducted via Sermo, the largest online physician community.

Note: Children’s Advil was a sponsor of the Mom Mixer event I hosted and I’ll be hosting a Twitter Party for Children’s Advil on November 12th, 2013. As always, all thoughts and opinions are my own.