Big news out of Universal Orlando today!!! Check out all these images and details about Skull Island Reign of Kong, the new attraction coming to Universal Orlando Summer 2016. This looks and sounds spectacular! Everything at Universal Orlando always blows my family away when it comes to their prowess as an entertainment company and their ability to incorporate the latest and greatest technology into their rides making them incredibly realistic. This is a sketch of what the entrance will look like. What a backdrop huh? 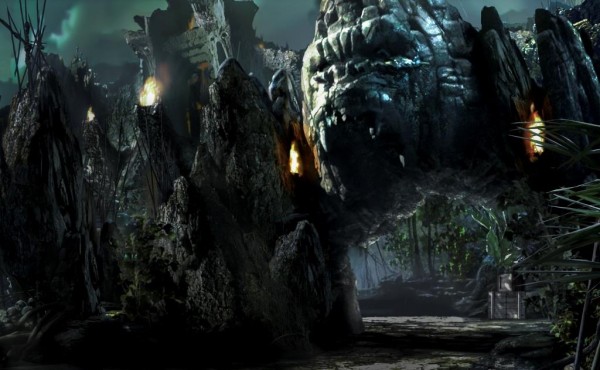 A film still from the ride….. Looks very realistic to me!!! I can imagine the screams of terror  – all in good fun – from my kids as they’ll go crazy for this ride just like me. King Kong will rule at Universal Orlando Resort next year in thegroundbreaking attraction, “Skull Island: Reign of Kong.” The new attraction will open in the summer of 2016 at Universal’s Islands of Adventure – and will be an intense, all-new adventure brought to life in a dramatically themed environment. Skull Island: Reign of Kong will pull guests into a powerfully told story where they become part of the next generation of the Kong legend.

It begins as guests are transported deep into a wild and mysterious world, where their mission is to discovercreatures of unknown origin – but where they are soon fighting for their own survival. Their journey willtake them through an ancient temple inhabited by hostile natives, a perilous jungle ruled by prehistoric creatures, a foreboding underworld of caves concealing unspeakable terrors – and face-to-face with the

Universal Creative is working closely with Peter Jackson, famed director of 2005’s blockbuster movie, “KingKong,” to immerse guests in this incredible adventure.“King Kong is a Hollywood movie legend and a huge part of both our history and our future,” said MikeWest, Executive Producer, Universal Creative. “He gives us the opportunity to tap into everything thatmakes our film history so special and everything that makes our theme park attractions so spectacular. Wecan’t wait to bring him to life in such an epic way.”

Known as “the eighth wonder of the world,” Kong has been called “the experience for which movies were invented.” Since first appearing on screen in 1933, “King Kong” has been re-made twice – each time on a tremendous scale – earning seven Oscar and three Golden Globe nominations.

And now – in even grander and more realistic form – the Kong story continues to grow. “Skull Island: Reign of Kong” will open in the summer of 2016. More details about the mega-attraction will be released over time.