Feel the force! Honestly, my kids SCREAMED when I showed them these images of the soon to be STAR WARS themed Millenium Falcon that will be part of the Oceaneer Club on the Disney Dream. Star Wars fans young and old alike are ecstatic with this news from Disney Cruise Line. It’s hard to believe the Disney Dream could get any more magical having sailed on it myself before, but I guess since the DREAM is almost 5 years old they figured they’d continue to WOW guests with these extra special new upgrades. 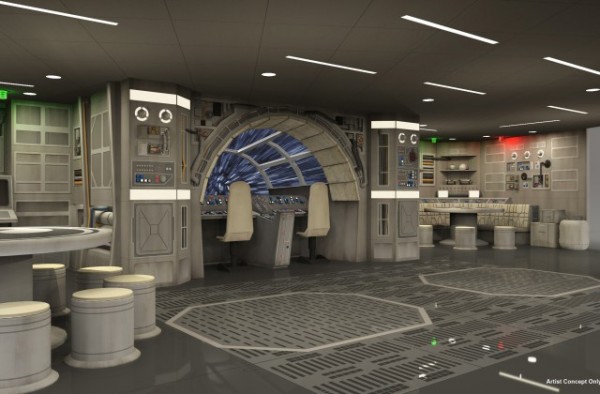 This upgrade along with a handful of other awesome upgrades will happen when the ship goes into Dry Dock this fall starting October 4th. She’ll be ready to sail like new come October 26th — complete with this Star Wars play zone and other upgrades that include adding a Bibbidi Bobbidi Boutique, Vanellope’s Sweets & Treats and an are exclusively for adults, on Deck 13 forward, Satellite Falls, a circular splash pool with benches and a gently falling rain curtain – which I assume is like the one already on the Disney Fantasy.

Who else is ready to set sail October 26th???

A newly themed area in Disney’s Oceaneer Club, open to ages three to 12, will delight children with an out-of-this-galaxy experience inspired by the Star Wars saga.

Kids will be transported to a far away galaxy at Star Wars: Millennium Falcon, a Force-filled play area inspired by the spacecraft from the legendary saga. Upon entering the spaceship, younglings will join the Rebel Alliance in the epic battle of good versus evil by assisting with the navigation of this powerful space vehicle. Sitting in the cockpit, children can pilot this super-cool spaceship through hyperspace and trigger lightspeed jumps to different locations around the galaxy.

In Millennium Falcon, children can express their creativity through Star Wars-themed crafts, games and activities. They can also watch episodes from the new Disney XD animated series, “Star Wars Rebels,” on a large screen or virtually join the rebellion at gaming stations featuring the series’ action-packed adventures.

The excitement continues during a shipboard version of the popular Jedi Training Academy experience that invites young Jedi hopefuls – known as “Padawans” – to learn lightsaber moves from a Jedi Master. They can then use the Force and face off in a final test against the evil Darth Vader.

Also in the Oceaneer Club, a high-tech interactive space based on the Disney Infinity video game offers more fun for kids.

In the Disney Infinity Toy Box area, children can experience a whole new way of playing together with exciting virtual experiences and immersive activities. Customized, on-screen adventures will bring to life characters and stories from across The Walt Disney Company.

The complete set of Disney Infinity character figures will be on display for creative inspiration and available for gameplay. Kids visiting this special room – found only on the Disney Dream – will be able to unlock exclusive Disney Cruise Line content that they can continue to enjoy when playing Disney Infinity at home.

Special activities will bring the virtual gameplay experience to life in the real world. For example, a life-sized Disney Infinity Base sets the stage where children take the place of character figures for a group gaming experience unlike any other. Lighting up in response to gameplay on a large screen, this interactive floor will allow kids to be immersed in the Toy Box.