Wow! Disney Consumer Products unveiled more than 130 toys inspired by TV shows on Disney Junior . My favorites are the new toys inspired by Jake & The Neverland Pirates. My kids fell in love with that show when it was released in 2011 and their love for Jake and all things pirate runs VERY deep in our house. I can’t wait for the kids to enjoy this cool stuff – my 4 year old son will be especially excited to get his hands on  this swashbuckling pirate ship that rocks, rolls, and even sprays water from Fisher Price $44.99. 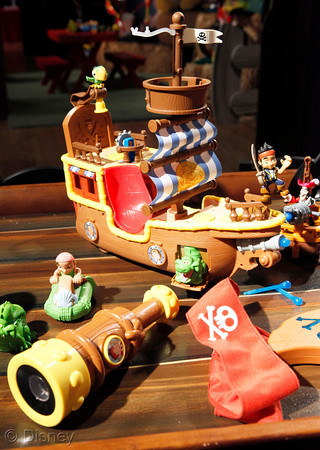 The event was quite the place to see and be seen as Mickey Mouse and Minnie Mouse were joined by special guests Sharon Osbourne and David Arquette, voices of Mama Hook and Skully on Jake and the Never Land Pirates, to treat the toy and entertainment industry audience to a fun talent show previewing new toys and upcoming content inspired by Jake and the Never Land Pirates, Mickey Mouse Clubhouse, Minnie’s Bow-Toons, and Doc McStuffins, a new animated series set to debut on Disney Junior next month about a six-year-old girl who heals toys and stuffed animals out of her backyard clinic. Here’s the 6 year old “Doc” as a doll from Just Play – she’ll be available for Holiday 2012 at $34.99. 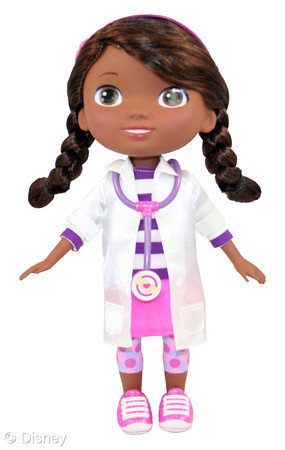 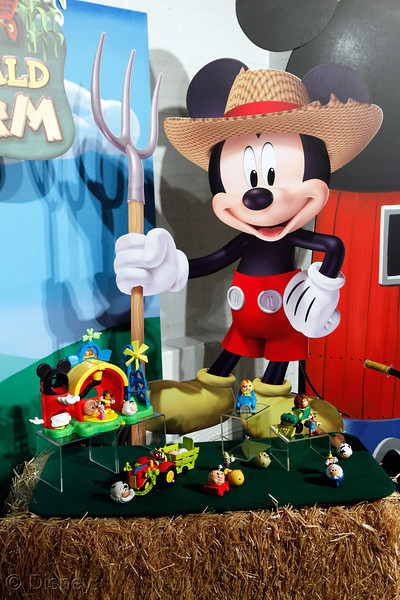 As far as more highlights go …  this is straight from Disney Consumer Products press release about the Disney Junior toy launch:

Key toys from the new Disney Junior toy line include:

Jake and the Never Land Pirates— A breakout hit, Jake and the Never Land Pirates ranked as 2011’s #1 cable TV series for boys 2-5, a spot it continues to hold, generating strong consumer demand for a merchandise line that allows fans to take home their favorite characters. A brand new toy line releasing in June will feature plush, role play and accessories from Just Play and action-oriented play sets and figures from Fisher Price, including:

Minnie’s Bow-Toons —Based on a popular episode of Mickey Mouse Clubhouse, this new series of shorts finds Minnie and her good friend Daisy Duck running Minnie’s Bow-Tique, a specialty shop which stocks only bows and bowties. Highlighting the themes of friendship, fashion and travel, DCP will introduce an adorable pink and polka-dotted line of Minnie Mouse toys including kitchen and fashion-themed role play from Just Play and dolls and accessories from Fisher Price.

Doc McStuffins – Debuting next month, this imaginative animated series features six-year-old Doc McStuffins, who communicates with and heals stuffed animals and toys out of her backyard playhouse clinic. Little girls can nurture their own toys with a fun new assortment of products from Just Play, including: