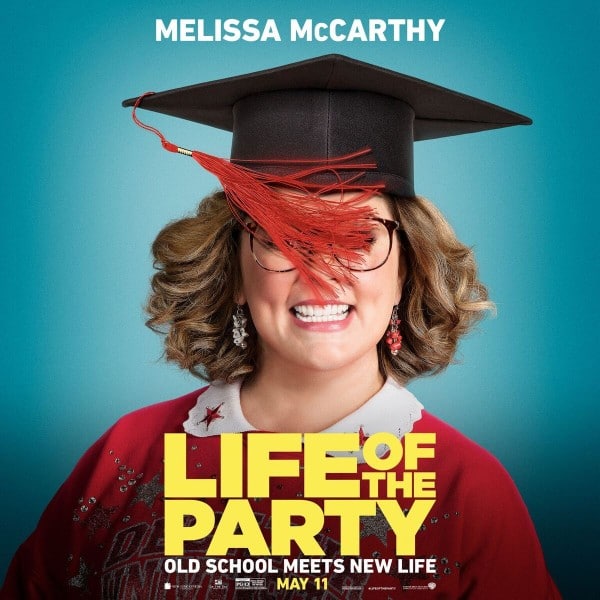 Yay! Life of the Party hits theaters on May 11th. I’m so excited to finally share that last year I had the opportunity to be on the set of Melissa McCarthy’s new film LIFE OF THE PARTY when they were filming in Atlanta. So cool to be the actually movie set and yes meet Melissa Mc Carthy! Woohoo!

Melissa teamed up with her husband Director Ben Falcone to create this heartfelt comedy. Awesome right?  Melissa plays Deanna who has recently been dumped by her movie husband Dan (Matt Walsh). Deanna decides to start taking her own chances by heading back to college where she winds up crashing her daughter’s freshmen year and experiencing sorority life through the unexpected eyes of a mom.

Melissa had the chance to sit down with us in between takes on set. Here’s a few of my favorite quotes and tidbits that Melissa shared while chatting on set with us.

On the inspiration for the movie

“Ben really had the initial idea of going back to school. He grew up in a college town and has a real sweet spot for universities in general. And I really got stuck on the concept of–I feel like three or four times within a two week span, I’ve heard somebody go, we’re not really go out to dinner people. Or we’re really not movie people. Or we’re not really–and I thought these are people my age. And I was, like, you can’t say that. You’re not 105 years old. Stop saying that stuff…if I didn’t do it at 20, I can’t do it now. And that kind of spun us into this whole thing that you can redefine yourself. And I think especially as a woman, it fascinates me that we are immediately sometimes categorized that once you’re out of your 20s, you’re done with this and then you’re done. And I just kind of reject that.”

“I would say you got to work really hard. I would make them start as a PA because they should know what the job is. They should know how much work. They should know what everybody does. I think that’s a biggie. I started as a PA. You’re the first ones there, last ones there. You’re the one that has to clean up, deal with all the trash. I mean, it’s just endless. But, you also get to learn what everybody actually does. How it gets made and how hard everybody works. I think that’s a biggie. And I would just say that if they really love it and if they work hard at it, I’d support them.” 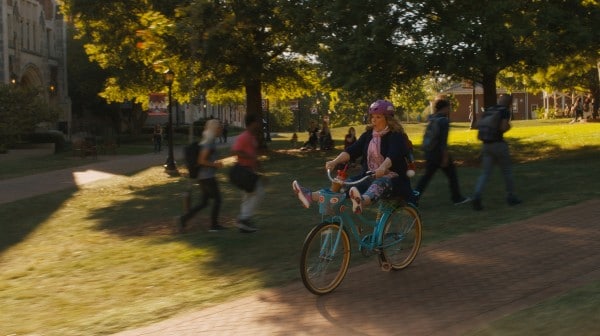 On mothering the younger generation of actresses in the film

“You know what? The joy of this has been that I didn’t know any of these young women coming in. They’re all new to me. And to watch them come in and not only become bizarrely close almost immediately, they just clicked. It was like that magical kind of thing you hope for when there’s no way to plan for that. And to see women, especially at such a young age, be so in their own shoes. They’re weird. They’re eccentric. They’ve got strange–very different sense of humors. Very different backgrounds. I think I really love seeing at that age that they’re just, like, oh, yes, I’m totally weird. Like, that’s okay.”

LIFE OF THE PARTY Movie Trailer

Final inside scoop: Be on the lookout for the movie’s 80s dance party scene. Rumor on set is that this scene was the most fun to shoot, so I’m assuming it will be equally awesome to watch. 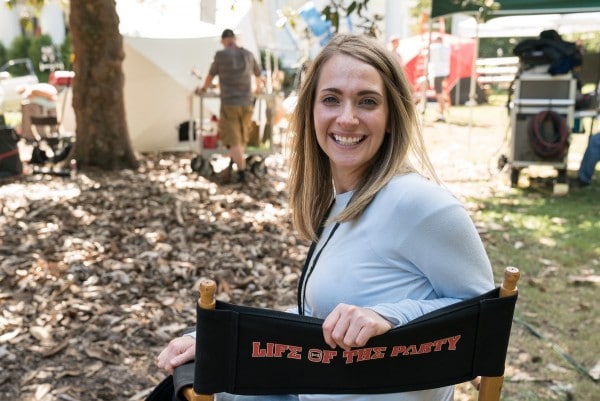 Life of the Party Official Synopsis

When her husband suddenly dumps her, longtime dedicated housewife Deanna (McCarthy) turns regret into re-set by going back to college…landing in the same class and school as her daughter, who’s not entirely sold on the idea. Plunging headlong into the campus experience, the increasingly outspoken Deanna—now Dee Rock—embraces freedom, fun and frat boys on her own terms, finding her true self in a senior year no one ever expected.

McCarthy and Falcone co-wrote the screenplay and produced through their production company, On the Day. Chris Henchy also produced the film, with Toby Emmerich, Richard Brener, Michael Disco and David Siegel serving as executive producers.

The film has been rated PG-13.

LIFE OF THE PARTY  In Theaters May 11