I absolutely ADORE Jason Bateman so finding out we’d be interviewing him on his role in Zootopia was thrilling. We chatted about his new film Zootopia and his role as Nick Wilde, the scam artist conniving fox who stars in the movie.

My Thoughts on what was it like to meet Jason Bateman

You never know what it will be like actually meeting a “celebrity” but I’m happy to report, Jason Bateman did NOT disappoint. He was just as charming, adorable and funny in person as we’d all hope he would be in real life. 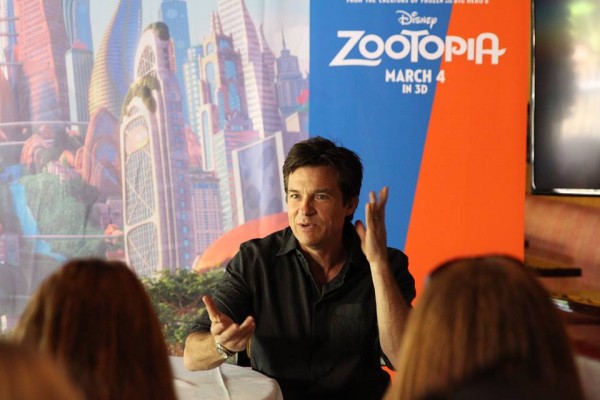 As a kid I was a fan of Jason Bateman in Silver Spoons and as an adult I’ve loved his roles in Arrested Development and all of his films. His quick wit and boy next door charm has always won me over!  Jason arrived to our interview relaxed, friendly and just totally comfortable to chat with us – not rushed at all – and the entire time he had our group of Moms laughing with his answers and wit. So yep, we’re all crushing on him even more now!

Jason Bateman plays the sly fox, Nick Wilde, in Zootopia who hustles unsuspecting citizens on a daily basis until meeting protagonist Judy Hopps, the motivated new bunny cop in town, who recruits Nick to help her solve a mystery to save her job and Zootopia after she’s been hustled by Nick and hustles him back in return to insure his assistance.

Bateman asked the film producers if they wanted him to put on any sort of voice…..  And apparently the Disney animators response was for him to do nothing but be himself. The animation team said, “No. You sound conniving enough!” Ha!

Q: What was it like to Play an Animated Character?

Jason chatted and explain that for all intents and purposes this was his 1st major animation opportunity:

“It’s a really interesting process because you know, as an actor you can say your line and then you’ve got your face and your body language and everything to kind of contribute to the whole thing. Obviously you just have your voice to use and then you hope that the animators that you pass that line reading off to are going to — they are going to make the character do something that either supports what you’ve done or offset it or juxtapose it. Cause it’s kind of a cocktail to make somebody laugh with something. You don’t realize how many little components there are. I mean, I don’t mean to sound like some kind of a comedy scientist but just, it just, I mean we all do it, you know…. When you tell a joke or a story there’s inflection and then there’s facial gestures and it’s a pretty strange thing to just hope that the rest of the recipe gets cooked in the right way.”

” And there’s not much of a fear of that with  Disney! So it’s an exciting thing to be a part of.” 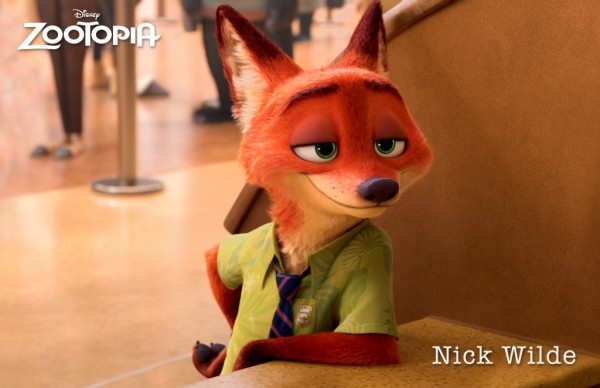 Doesn’t Jason Bateman actually somehow resemble his animated character Nick Wilde??? AMAZING and Disney magic at it’s best! And as you can see from Jason’s answer below, the animation studio really does CREATE a character based on whomever is voicing it and somehow when they create that “cocktail” they manage to incorporate the persona and inflections of the voice talent. Incredible!

Q: As a parent of 2 daughters – ages 9 & 4, what was it like going into this role as a dad? Do you have a different mindset?

“Yeah, it’s very, very cool to be leaving home to do a job that I can prove that I was actually doing.”

Since most of Jason’s work is certainly geared to us adults this was hilarious!

” Knowing that they are going to see it…. it gives you pride.”

“First of all, it’s the only movies that I see now, that we all know, like a kid movie comes out, you have to take them and you just hope that it’s good. And if it’s not good, you are still buying a ticket to it!  You still have to sit there…… You just might catch a little nap, you know? But with this one there won’t be any napping cause — this company is so good at braiding some stuff in there for us that whether it be thematic or just with the jokes, there’s always that kind of parallel lane of satisfaction for the adults.”

Ha! Once again Jason had us all laughing and relating to seeing every kid movie. And I can agree this movie will not cause any napping for parents as there are all kinds of fabulous references adults will love in the movie that will go right OVER the heads of the kidlets! There is a Breaking Bad reference in Zootopia that is fantastic and all kinds of Godfather references too. 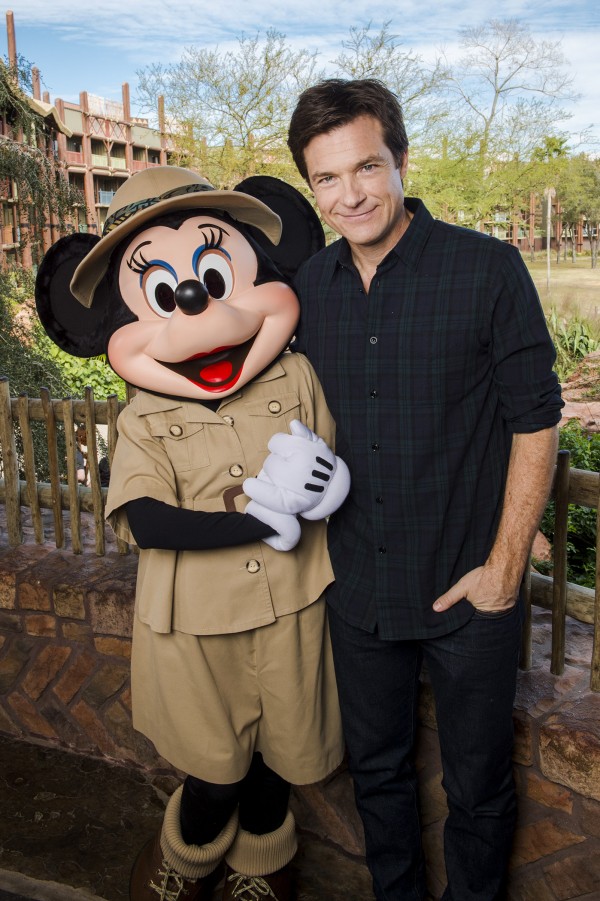 Q: Who was Your daughter’s Favorite Character?

“I didn’t really get a lot of specific like oh dad, you were great when you did this, you did that, she was kind of focused on Shakira, um, and of course Judy Hopps,” the super adorable bunny who is the star of the movie.” 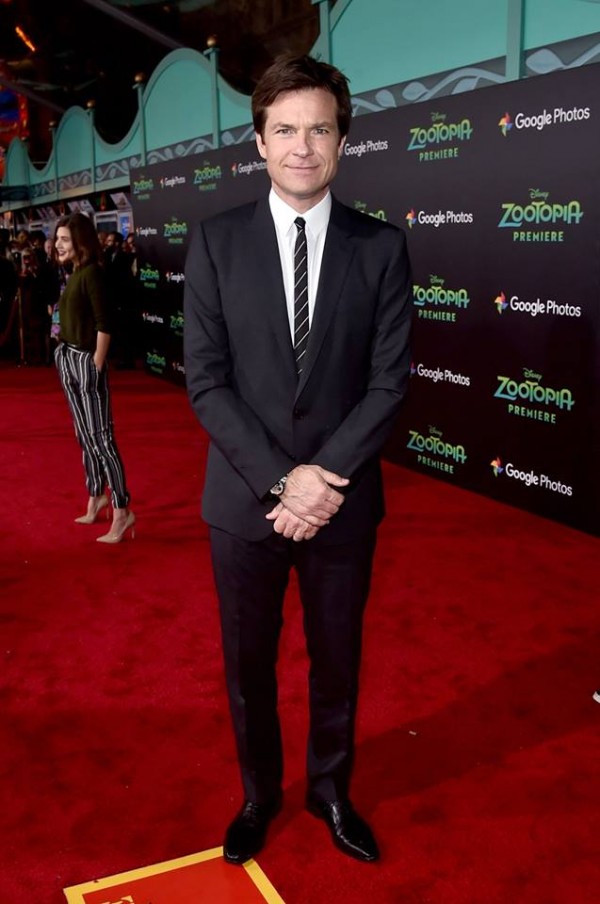 I loved Jason’s thoughts on Zootopia and how as a parent many of us will be able to use this movie as a tool to talk about very important issues like racism, fear mongering, and bullying.

“There are some really great issues that, I don’t know if my nine year old really picks up on some of the nuance and sophistication of, these heady, highbrow issues yet, but I’ll bet you some of it kind of permeates, and when the coin finally does drop maybe when she’s another year older or something when we’re watching it for the 20th time at home, as we all buy it again when it comes on.”

“As a dad, it’s hard to talk about racism or xenophobia or fear mongering or bullying. It’s when I have a character that I can pause and I can say okay, you see how that hippopotamus kind of gave a look to the… It kind of makes the medicine go down a little bit easier and it makes it a little less ominous for them to broach these subjects. It’s a nice tool for me as a parent. I like that.”

Jason was happy to take a photo with all of us too. We loved him! 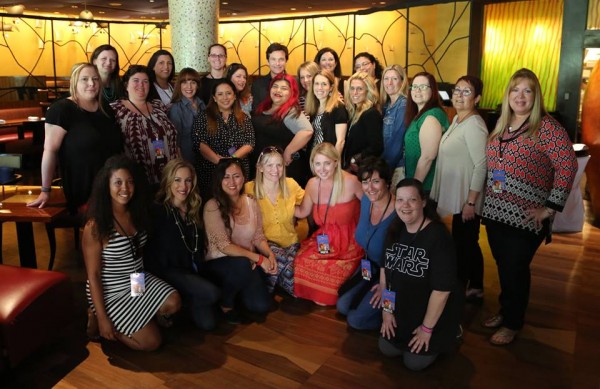 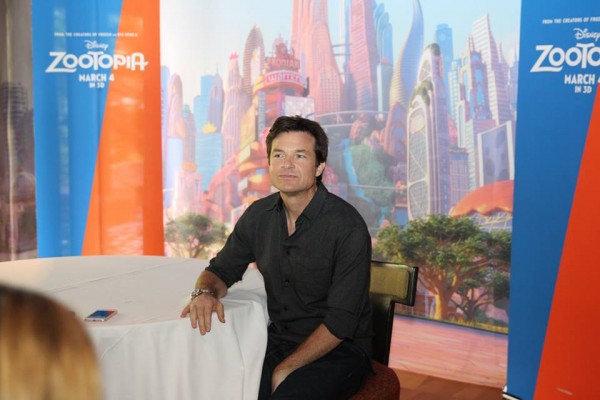