It’s not often an interview is so amazing it brings you to tears – but the force that is Victoria Alonso, Marvel Studios’ EVP of Physical Production & AVENGERS: INFINITY WAR Executive Producer did just that – in the best way possible and I left her interview inspired, recharged and wowed by her insight.   This interview was incredible in so many ways. The time Victoria spent with us and how genuine she is as a person touched all of us.  Victoria is truly a Hollywood Changemaker and literally the woman behind what is the Marvel Cinematic Universe as we know it. We loved hearing about her career but even more, as females, and mothers,  the entire group of us was inspired by her wisdom. Victoria is a storyteller, a force, and I admit most of us were  brought to tears by her moving words! (Not just me LOL 🙂

And yes I had to snap a photo of myself with Victoria! Love her!!!!! 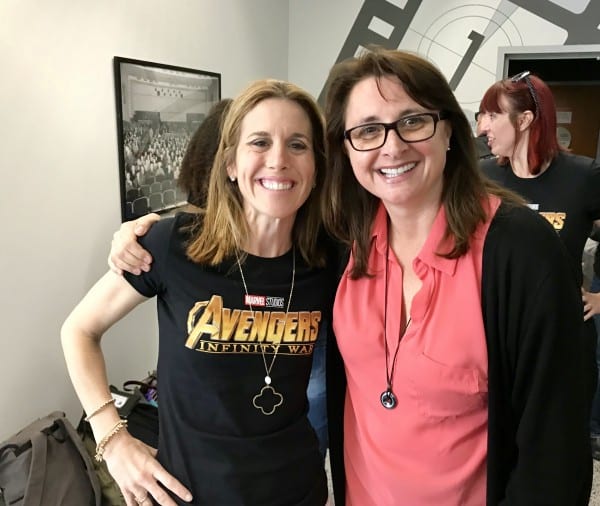 Take a peek below as I’m sharing lots of snippets and highlights from our interview full of inspiring thoughts from Marvel Executive and Changemaker Victoria Alonso.

Victoria told us she has worked on EVERY Marvel movie since the beginning with IronMan. Avengers: Infinity War is her 18th movie and she has 5 more Marvel movies for a coming soon in the works for a total of 23. CRAZY awesome right???? 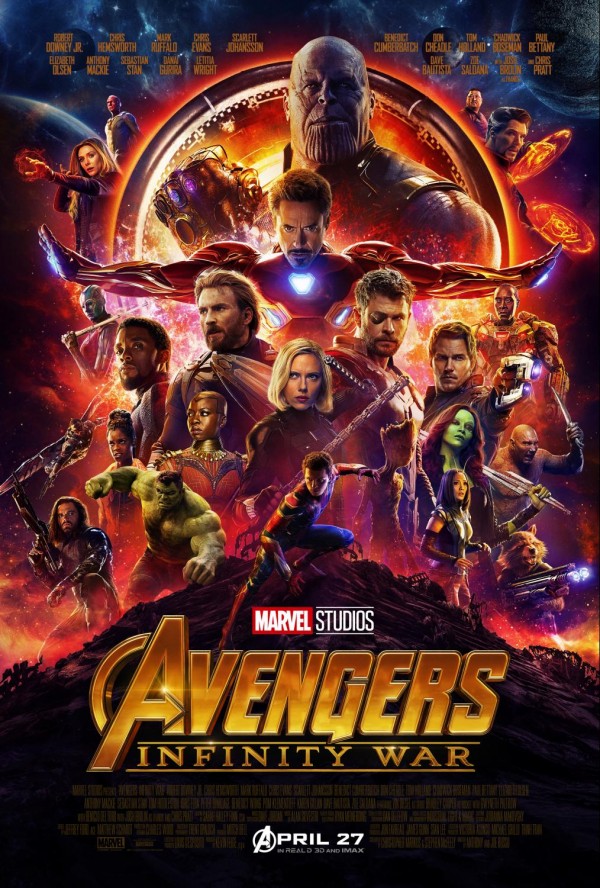 Victoria, also a mother of an 8 year old daughter,  spent over an hour with our group of mom influencers and it felt like sitting down with an old friend. I can’t share any spoilers from the conversations we had specific to the Avengers Infinity War but I can give you a taste of her wisdom and changemaker attitudes!  This fascinating woman is a total success and it’s no wonder with a force like her behind Marvel that the Marvel Cinematic Universe has touched all of us. There’s a ton of amazing content to share but here’s a few of my favorite tidbits!

On Bringing Her Daughter to Work

We wondered about her relationship with her male executive counterparts at Marvel and what it’s like being a female Executive while balancing motherhood at such a high level in Hollywood. As someone who used to work in Corporate America myself, I am THRILLED to hear about her experience and influence. She’ve paving the way for the future!!!!

“I work with a very nice group of men. I said to them I’m going to adopt a child. And one day I will come to you and say I’m going, and I did.  I was packed to go to San Diego for the first biggest Comi-Con of our careers, for Avengers in 2010. We got a call from her birth mom in Chicago and we left.  I called the boys and I said I gotta go. I’m gonna go get my girl. And I did. And I came back a week later with Olivia. And I brought her to work for 18 months, three days a week.”

“I encourage Moms and Dads to bring their babies to work.”

On Creating an Environment for Moms to Work at Marvel

“I encourage moms.  I’ve created the capability for those that have been with us, if they wanna go have babies, all they have to do is say it. I’ll figure out how it will work, and then they can return. They can return and have the same job. Not three steps below because they went away for whatever time. They were capable before, they’re more capable now.

And if they have to leave at five, which is not a production time to leave, they go.  When I need an email, a text, a phone call answered, they do it. Moms work incredibly hard. After we put our kids to bed, we’re still working. So, I know I’m getting the devotion and the dedication from those moms. So, I love it. You can’t just talk the talk. You gotta walk it. The men that work with us are incredibly aware of what we need to do. Change is slow. I’m rather impatient, I must tell you.”

Since Victoria’s daughter is only 8, she’s just started to get introduced to the Marvel movies and has only begun to watch some of them, but quickly her daughter is realizing just what an impact these movies have on all of us!

Victoria shared with us that her 8 year old daughter recently said to her, “I know I didn’t do it, but since you made Black Panther, I’m like a really popular kid.”

I said, well, I think you’re popular because of you not because of the movie. She goes, no, they all knew what you did and everything!  And I said, oh, I guess that’s great.

Victoria told us the teacher’s at her daughter’s school invited her to present at a school wide career day since they saw her as a “Changemaker”.  And after her presentation, her daughter Olivia repeated for about five weeks out loud, “My mommy’s a change-maker. My mommy’s a change-maker.” I thought what a beautiful thing, because I knew my mother was a change-maker, but I never said it aloud because I didn’t have the words.  The fact that she can say it out loud and she can look up to it is a beautiful thing.

On how Mothers can Instill in our Daughters  (and Ourselves!!!!) That Women Can Do Anything

This part of our conversation was very emotional as her moving words brought me and most of the room to happy tears! We all loved her input on how WE can instill in ourselves and our own daughters the idea that WOMEN can do anything.

“Listen, I think that women need to believe in their core that they’re equal. Because I see it in my daughter at seven, and, boy, she’s gonna take it over. And there’s a shift somewhere along the way, I think when they turn between 12 and 15. And something shifts.

You gotta believe it in your heart. You do.

And the one thing that unites us really is the love. For our family, for our partners, for our children, for our country, for whatever. Whatever it is the love that you feel. It doesn’t divide us. I mean that’s really Black Panther. It’s the love of country, the love of people, the love of kingdom.”

On Tips to Help Young Girls Establish a Career in Hollywood …..to be an Executive like Her !

I asked Victoria if she had any thoughts on how to follow a career path like her since I have a 12 year old daughter curious about Hollywood and telling stories ……..  I wondered if she had a set path she followed or what advice she might have for Kenzie. Instead, since she touches literally EVERY single part of the production process – from storytelling to costumes to producing she shared the following advice.

On Choosing Invisibility as her Superpower if she was a Superhero

I think there’s certain conversations I’d like to hear.  I think I would like to hear Olivia on the playground when I’m not there. You know what I mean? I think that would be really cool. I think it would interesting to just be a fly on the wall in the restaurant and hear people chat.”

She hobnobs with the stars on a regular basis for sure and it was neat to hear how she was so excited to meet up with the cast after the premiere at their more private “AFTER” After Party to chat about their thoughts on the final production after their first time viewing it all play out.