Kristen is the one of most charming, witty, and likable celebrities I’ve ever met.

Meeting Kristen Bell was a giant highlight of my trip to the Disney Frozen premiere. Kristen Bell plays the voice of Anna, the lead character in Disney’s new animation, FROZEN, which is ready to hit theaters this week on Weds. November 27th.

And let me tell you, Kristen Bell can SING! I mean really sing. At it’s heart, Frozen is a truly an animated musical and Bell carries the movie with her character’s adventures and songs.

After chatting with Kristen Bell for 20 minutes, I feel like she’d be one of my best friends. She is just so down to earth and easy to relate to. I admit that I’m sure everyone who meets her feels like she might also be their best friend – I think her shining personality probably has that effect on everyone! 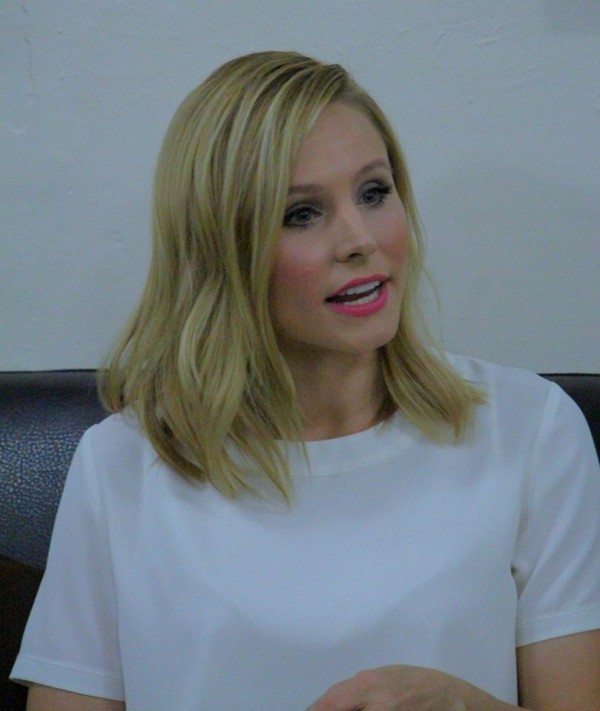 Kristen Bell’s sparkling personality drove the creation of the lovable character, Anna, that she voices in Disney’s Frozen. Kristen’s thoughts on Anna:

“I just wanted her to be who I wanted to see on screen when I was little, which is someone who talks too much and too fast. And puts her foot in her mouth and is goofy.

I don’t want her to have dreamed of holding a sword her whole life.

I wanted her to be the driving force of the movie. And not just be the damsel that needs someone else.

She’s not the girl who has her hair braided by birds. She’s who I felt like I was when I was a kid.”

On Being in the Animated Movie FROZEN

I’ve always wanted to be in a Disney animated feature since I was four or five years old. It was the first goal I had ever set for myself!

The reality is I originally auditioned for Tangled.  After my audition the casting director pulled me aside and she said, oh that was great and I think we are going to go another way, I think she knew they were…. but I want you to meet Chris Buck because he’s directing a project that’s a few years down the line called The Snow Queen, and I think you’d be right for it. ( The Snow Queen became the movie titled FROZEN)

Q: Did being in musical scare you?

No, that was what incited me to want to do it, because I studied music in college and I trained operatically when I was a little girl.

I love musical theater so, so, so much.

I’d done a couple Broadway musicals and I try to keep music as relevant as possible. It puts me in a mental state of happiness like nothing else, I think. Really like nothing else. Maybe now other than my kid!

On Preparing her Voice for her FROZEN Role 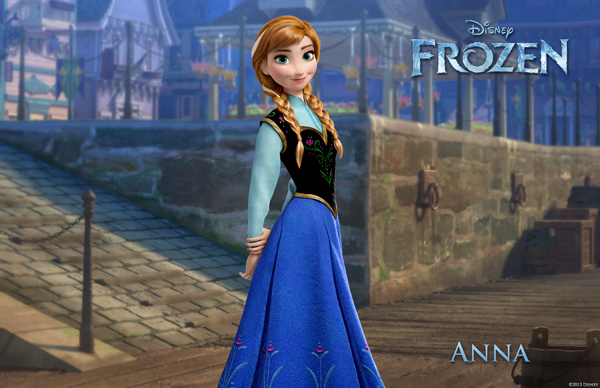 Q: What did you do to prepare?

I came in with so many ideas, because this was not how the movie was written at all. The inception of the script was much different than this script we have now. And it went through quite a few rewrites and finding everything, ’cause originally the characters were mother and daughter. And then they were sisters. And then they weren’t. And then they had Elsa and Anna. And then I think they just tried to figure out what worked the best for telling the themes of the story while using the Christian Andersen fairy tale as an outline.

I knew exactly what I wanted to do going in, I was like:

I don’t want her to have good posture, I don’t want her to like have dreamed of holding a sword her whole life. I didn’t want her to be one or the other of the archetypes that I was used to seeing.  I just wanted her to be who I wanted to see on screen when I was little, which is someone who talks too much and too fast. And — ha ha ha – puts her foot in her mouth and is goofy, but really kind of likes people, being social,being positive.

And I really wanted her to also  proactive, I wanted her to be the driving force of the movie. And not just be the damsel that needs someone else.

Like it’s not, she’s not rough and tumble, and she’s not, the girl who has her hair braided by birds. She’s who I felt like I was when I was a kid.

Question: How did you incorporate your ideas into Anna?

Well luckily, I pushed!  I have a lot of opinions. If I’m being told to shut up, you’re going to hear ‘em first.

I kept just kept pushing for places where I thought she could be funny and goofy.

In my eyes, the beauty of Anna is that she’s so imperfect and so embraces all of her imperfections

Kristin asked if she could just, ” talk for a while, do the scene as I would, and they always said yes, and it always made it in.”

On Hearing Herself Animated compared to on Gossip Girl

Question: You’re on Gossip Girl and now you’re animated, how is that different?

That’s kind of what it felt like to me on Gossip Girl because I don’t love the sound of my own voice.  With animation, it’s much nicer to be able to pay attention to a story line and not think, “I sound so screechy and  pick myself apart. 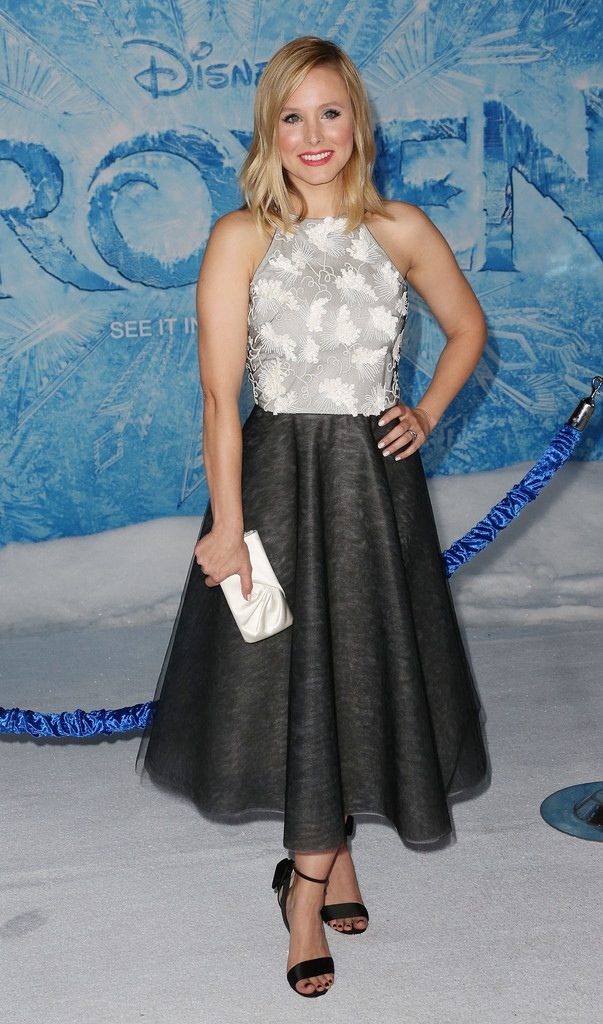 This is also my favorite scene in the movie too! It was fun to interview Kristen before seeing the movie and then see the scene and now this was her favorite.

The scene that I connect to the most – not necessarily because of a personal experience – but because I appreciate  the story that’s being told, is not actually my scene. It’s a scene with Elsa where she has a song called, “Let It Go”.   Idina, who plays Elsa, is obviously a powerhouse and she just blows it out of the water.

The movie is really about Elsa embracing what makes her different, because that’s what makes her unique. And learning how to not let her fear paralyze her.

It’s the moment when Elsa loves herself.

Question: What was it like to work with Idina?

I mean she’s like the best singer on the planet. Currently on the planet. And she is just such a powerhouse. If you meet her, your blown away, because she’s so soft spoken and she’s kind of diminutive and just sweet. It’s like she’s the opposite of what you think you’re going to get.  She’s not cocky at all.

S he did her best to make me feel like safe and confident ’cause I was kind of like a little jittery, I mean, we’d have rehearsals at her house, like at her piano in her living room and I was just like, oh my god, I mean my blood sugar is so low!  It was intense.

I’d sing my verse and she’d whisper “good job!” and then launch into hers and I was just like, WOW she’s a dreamboat!

Who doesn’t love Veronica Mars? It was fun to hear Kristen talk about Veronica too!

Question: On Veronica Mars…. What does it feel like to come back ten years later and the fan base is still there?

It’s the most flattering thing ever, I can’t imagine anything more flattering. I held onto this character because I love it  But I don’t know if my views line up with everybody else’s or my tastes. 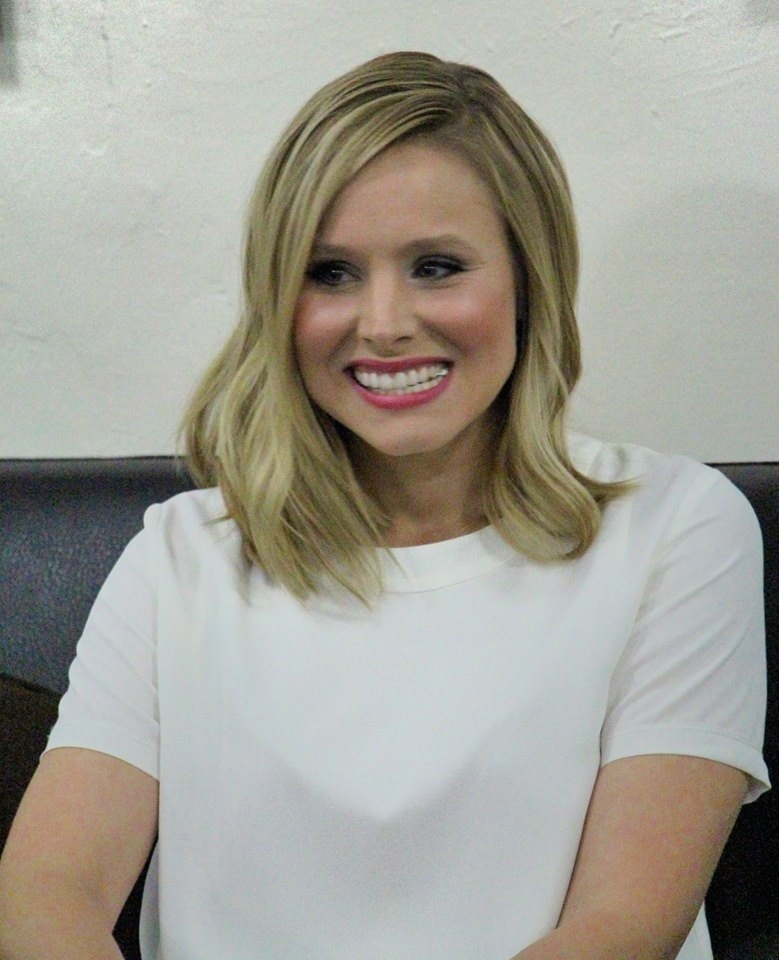 I was like….. first of all who cares, then we’ll have eighty nine dollars and we’ll make the movie.

Second of all I just felt the reality is every journalist that I am interviewed by in the last seven or eight years has said, “Will there be a Veronica Mars movie?”

Your job as journalists is to represent the people that are reading your blogs, or media outlets, or whatever, so clearly people want to know the answer.  And that’s how it came about, that’s how I convinced them. Still,  the response was overwhelming.  It blew us out of the water.

I still don’t even think it’s real! It was a great experience with everybody getting back together and we all have kids now too.  So it’s like, Mini Me’s running around. Mini Logan and Mini Veronica and it was just cute.  And Mini Wallace!

Kristen gave us all a THIS BAR to test out so we could spread the word about this special project Kristen is working on as a co-founder and ambassador.

This Bar Saves Lives,  is a healthy snack bar that helps fight severe acute malnutrition. For everybar sold, they give a packet of life-saving food to a child in need. Since launching this past June, This Bar has given over 58,000 meals and counting. Think Toms Shoes for food or Kind Bars that give back. 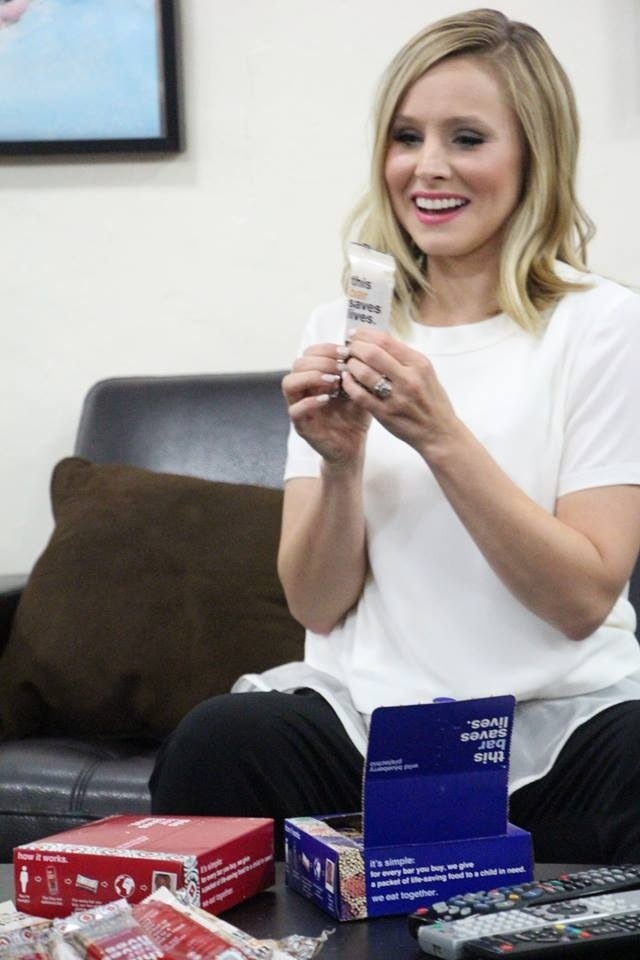 Here’s all of us bloggers posing with Kristen before the premiere of Frozen. She was a total doll and beyond adorable. Love her! Can’t wait to see more of this talented actress in the future. 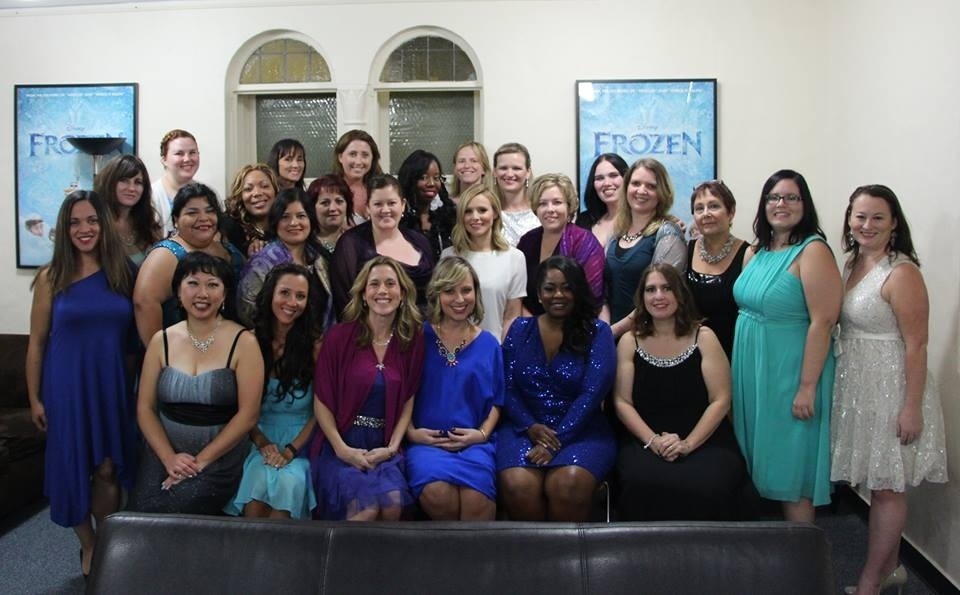 Note: Thanks to Disney for paying our travel expenses to attend the Frozen premiere and press event. As always, all thoughts and opinions are my own.