Last month, I was able to chat with the genius team at Pixar about Monsters University, releasing in theaters everywhere on June 21st, 2013. Check out highlights from our roundtable interview with Monsters University Producer Kori Rae.

Kori has been close to these monsters for years – she worked on the original Monsters Inc as an Associate Producer. Here’s the scoop on her Q&A.

We all wondered if we could expect a 3rd Monsters movie – and she didn’t have any information to share on that as she said right now all they were working on what turning out Monsters University for June 21st.

I especially love her input about how Pixar is able to turn out stellar top movies AGAIN and AGAIN  that are hits at the Box office, for the entire family and tell a story that touches our hearts on an emotional level too. 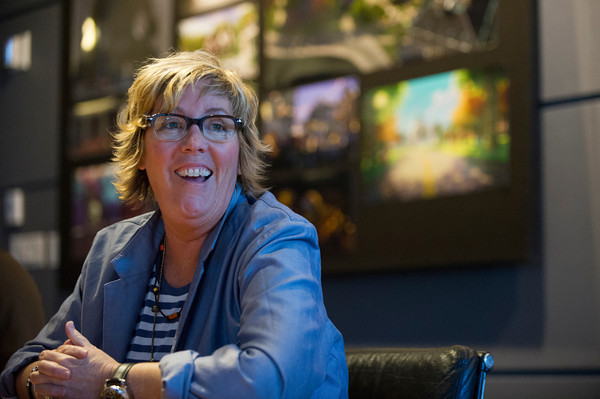 Pixar has been so consistent about producing a high quality experience, and emotional experience, a story based experience, and film industry is typically sort of up and down.  Like a studio will put out something that will do well, and then it will flop.

What would you attribute to Pixar’s track record of success ? Is it personnel?  Is it a dedication to a specific part of the process that allows you to do something so consistently well?

KORI RAE: ” Right.  I think it’s both.  I think it’s personnel.  I think we, we do have incredibly talented people here.  John Lassiter, you know, kind of brought in Andrew and Pete to begin with, and, and have, has, have continued to bring in really talented people.  But I, I do think it’s also a lot about the process, and the fact that we are willing, the directors and the filmmakers, are willing to put something out, have it torn down completely, go back to the drawing board, put it back up, have it torn down — that’s the thing you have to be willing to do.


You have to, in my mind,  be willing to let go.  You have to be willing to throw stuff away, and not get too attached to it.  And you have to do that over and over again in order to get to theright place.  And the things that you’ve loved, you know, at one point that, that got picked out often make their way back in.  But I think it’s the willingness of the directors to do that, and the collaboration, and the fact that it’s done in a collaborative spirit.

“It’s not done in a mean spirited way.  It’s like, hey, everybody here wants to make the best film.  The filmmakers that are working on that, and then every other person who’s involved, the whole studio wants to make it a great film.”

“The directors, and the, you know, the, the filmmakers have to kind of make those choices when it comes down to that. “

“That’s the real beauty of it, you know?  And, and I think that is why we’re successful, it’s because it’s not about egos. It’s really about putting the best thing up on that screen.”

Q:  On how many people worked on Monsters University?

Q: How many people worked on the whole process of Monsters University?

KORI RAE: “At our peak, the, the crew size ramps that start small, then it ramps up, and then it ramps back down.  Um, at our peak, we’re about, uh, 260, 270. Yeah.  And so departments kind of come in and out.  It’s a, it’s, you know, it’s kind of a linear process.  So you have story and editorial and art up front when you’re designing and, and creating the film, and then all of the, the other departments come online.  And so, at a point probably about [STAMMERS] five months ago, we were at our peak at about 270 or so.  And then it kind of ramps down.” 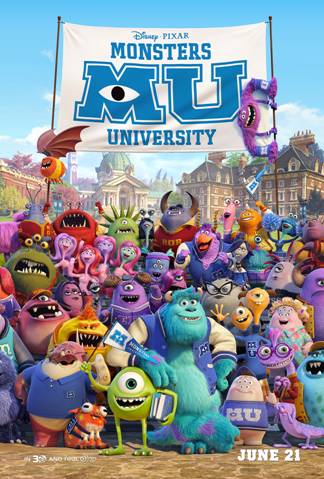 KORI RAE: “I majored in secondary education, in English, I taught and coached right out of school for a little bit.  And then decided to change directions and do other things, and that led me here to Pixar eventually after a few years. ”

“Producing is definitely a lot like teaching and coaching, I think.”

Q: What subjects did you specifically teach and what sports did you coach?

KORI RAE: “It was eighth grade English.  Um, and, uh, and then I coached volleyball, softball, and basketball.”

KORI RAE :  “I love love them all.  No, you know who I do really love,  Dean Hardscrabble.  As a character and as a character design. I just love that she’s, you know, this, this strong, powerful, character, and  that Sully and Mike cause her to shift a little bit, her way of thinking.” 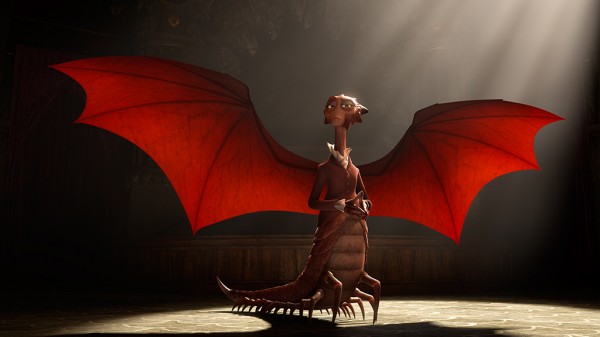 Note: Thanks to Disney for paying my travel expenses to attend this press event for Monsters University. As always, all thoughts and opinions are my own.