For all your folks gearing up to see Monsters University and for those who already saw it this weekend in the theater, here’s the inside scoop on Scott “Squishy” Squibbles, one of the most loveable monsters on the MU campus and an Oozma Kappa Fraternity brother to Mike and Sulley. 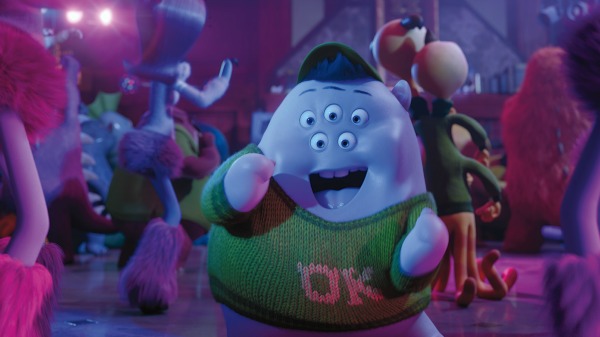 After visiting Pixar this spring for the MU press junket, one of the most fascinating interviews I had was with Peter Sohn, part of the Pixar animation team for 11 years who also plays the voice of Squishy in Monsters University. This wasn’t even his first time voicing in a film as Peter Sohn also voiced Emile in Ratatouille. Talk about talent right?

Here’s some of the highlights from our interview with Peter Sohn.

How Peter Sohn Got the Role of Squishy 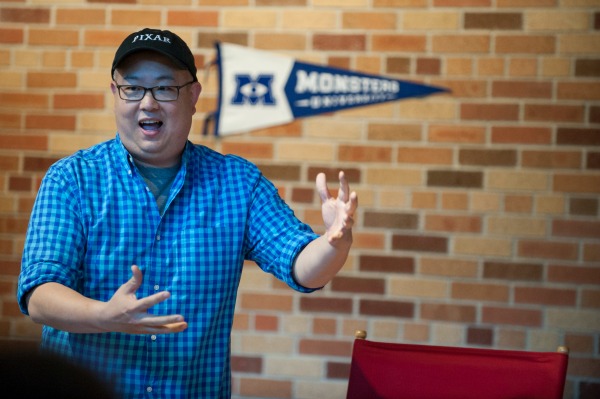 And so I’m pitching stuff. And as you’re pitching stuff you do voices. But this was a straight on kinda casting call for the thing where they wanted me specifically. So it was just Dan saying– and– Cory– come on down and do the scratch voice for it. And do you know what the scratch voices are? It’s just like– what scratch voices means is, um, uh, temporary, like, fake voice just to put something in there just to feel out how the story’s going to work.

That’s how I started with just like, okay, scratch, this is just fake dialogue stuff. So, uh, whatever you want me to do Dan. And then it became permanent. It’s really interesting ’cause, uh, working here at Pixar and then doing voices, it’s just like it’s kinda this give and take,  with all the other productions here ’cause it’s so familiar. When in such family, you want to do whatever you can for each other. So if someone’s just like you’re in the middle of a punch, go, hey, could you quickly come down for ten minutes and just scream into the microphone about, you know, your mom.

Uh, yeah, sure. Mom!  Then– back to work. It’s this give and take that’s really fantastic here. Because they have a studio here,they allow this kind of creed of freedom of, yeah, you can do this.

Peter Sohn’s Thoughts on his character Squishy in Monsters University

I like that he’s so sincere about naïve things. You know,, there’s a scene in there where Mike and Sully want to throw a party. And he’s like this is great. Grab some couch cushions ’cause we’re gonna build a fort. You know, like, I totally connect with that type of guy just ’cause that’s how I grew up with my cousins. We didn’t have the Internet. So the world was so like out there. For us it was just like Oh my God. You have the one piece of Lego like whatever that is that you can just nerd out for a while.

What About Your Dinosaur Movie?

I had dinosaur love from really early on. Who didn’t? But it’s just about trying make these characters as– as real and– and sincere as possible. So that’s the– you know, you just want the movie to go like this. Like here’s my part.

Do You Have Another Favorite Character in Monsters University

I love Art. You’ve seen Art. Uh, like, uh, there are a lot of really funny scenes with him. Cause I’m a big Muppet fan too. And he embodies  the Muppet feel. But you can’t imagine how– like if it was a real Muppet, how you would work that type of shape. And because of the, uh– what’s so exciting about 3-D is you’re able to do these kind of things, get that feel that you had when you were a kid but make a whole new thing out of it.

And I love Ms. Squibbles. I thought she was really, really funny and  heartwarming

Be sure to check out Monsters University now playing in theaters everywhere. It is monstrous fun for the entire family! 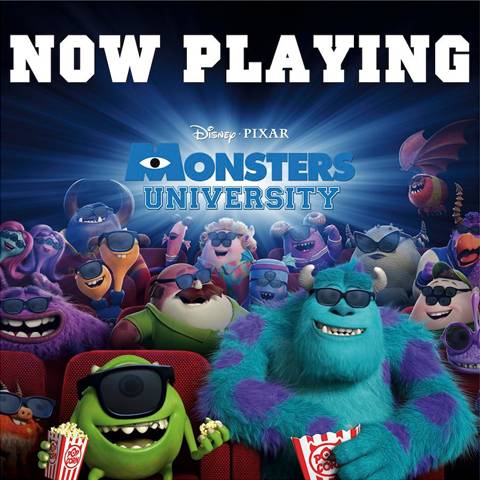