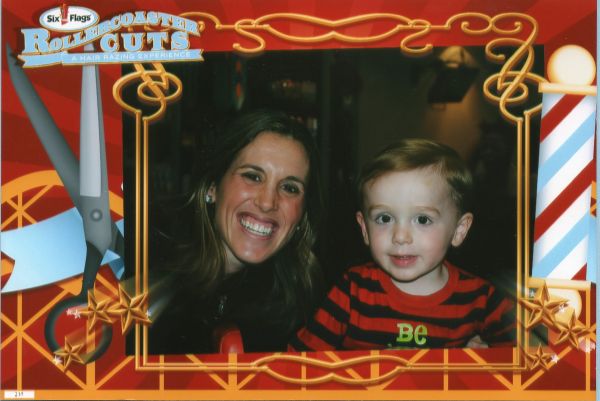 Who knew a hair salon for kids could be like a theme park? Well, that’s just what Six Flags Great Adventure has attempted to do with their kid friendly haircutting chain called “Roller Coaster Cuts.”

Kyle loved every moment at Roller Coaster Cuts for his little haircut a few weeks ago.  I dropped his big sister off at preschool and the two of us took off for a special date at the King of Prussia Mall for him to get a cut.

How was the Entertainment & Experience? The salon was fabulous and not crowded at all since we went during “school hours” on a weekday. The store was full of bright colors and just about every tempting toy and candy imaginable. Costumes, Wiggles toys, tons of Thomas stuff which all excited my little boy and made him feel at home. Even better was the lollipop he was offered before his cut even began to relax him with the hairdresser. The lollipop was the way to win his heart and he climbed right up on the big chair and sat by himself quietly devouring his lollipop for the whole cut.

The kids can watch TV while they get their hair cut too. Both  mini Thomas the Train episodes & mini Wiggles episodes continually played back and forth during his cut.  And had we booked on a Saturday – Dorothy the Dinosaur and Wags the Dog would have been there in full costume – Kyle would have loved that and 4 yr old Kenzie is now begging I let her go for a “style” on a weekend so she can experience Roller Coaster Cuts. (Yes she is jealous of her 2 yr old brother’s hair cut with Mommy!)

How does Roller Coaster Cuts compare to other kid friendly hair joints? Previously, we’ve also experienced the kid friendly – Snip Its Salon so had that as a basis of comparison…. I would say Roller Coaster Cuts is far more commercial with tons more branded toys and better TV for the kiddies – as the TV’s at Roller Coaster Cuts play familiar character cartoons like the Wiggles & Thomas. At Snip Its, the TV plays a Snip Its original episode again and again which bores the  kids quickly vs. Thomas & the Wiggles – especially for Kenzie who has now been going there for a year and it is still the show playing on the  little tv….however it was a thrilling for her the 1st time around!

Price Comparison — RollerCoaster Cuts was on the more expensive end of the spectrum as any kid salon but you are paying for the experience. Kyle’s cut was $22 and would have been $16 at SnipIts ( or $13.99 with the discount from buying a book of haircuts which I do)

Overall we loved Roller Coaster Cuts. It was fabulous and every cut comes with an adorable pic of your little tyke post trim too – which was a fun way for us to remember our special day together.

Disclosure: Six Flag paid for Kyle’s $22 hair cut. Thanks for a fantastic day and adorable cut!