We heart LunchSkins and are thrilled to see this Mompreneur company hit the aisles in Target. Hooray! Lunchskins2 now sells an affordable multipack line at nearly 300 Target stores nationwide!

We reviewed Lunchskins years ago and now are happy to report anyone can buy these eco-friendly snack bags, sandwich bags,and oversized “sub” bags in store at almost 300 Target stores and of course as always, they are available online. LunchSkins were founded by 3 Green Moms who wanted to make a difference and a dent in the 20 million plastic bags used in school lunches daily. 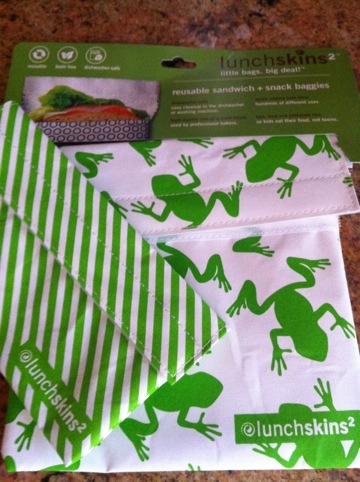 LunchSkins are easy to wipe down, BPA, lead, and phthalate free, re-useable, dishwasher safe, and are available in super cute patterns – from frogs to ladybugs to navy dogs at Target. (Lots of other styles abound as well in the original LunchSkins single packages too  – think polka dots, stripes, flowers, and even snowflakes!)

Take a peek at LunchSkins in our video below:

We’ve got a great giveaway for 1 lucky winner. One reader will win 3 sets of Lunchskins2 packs ($33 value) and one 3 month subscription to The Six O’Clock Scramble $21 value.
How to enter to win the LunchSkins Giveaway:

Disclosure: Thanks to LunchSkins for sending us samples and prizing to facilitate our review and giveaway.