Who else loved Joey McIntyre when they were growing up? Calling all Philly area peeps & Joey McIntyre fans! This Friday night, Joey, former boy band heartthrob,  is doing a Meet and Greet to in King of Prussia PA at the new Town Center in the Xfinity Store. He’ll be there from 5-7  to promote his new TV show, RETURN OF THE MAC,  and meet fans. So cool! Did the 14 year old in you just get weak in the knees??!!! Check out the details to Meet Joey McIntyre at Xfinity Store in King of Prussia below. 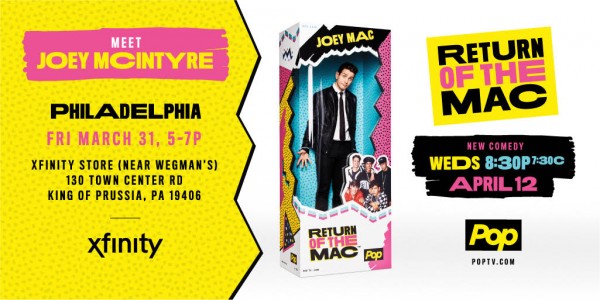 The new show looks like  a really funny comedy where he plays a version of himself. The full scoop is below.
Return of the Mac premieres Wednesday, April 12 at 8:30P/7:30c on Pop. Learn more about the series and find your channel at poptv.com.

If you’d like to RSVP for Joey’s event in King of Prussia,  check out all the details on the Facebook page here.

RETURN OF THE MAC Synopsis

RETURN OF THE MAC is a scripted comedy starring boy band heartthrob Joey McIntyre as a version of himself alongside his real-life family—wife Barrett and their three children, Griffin (8), Rhys (6) and Kira (5). As he embarks on a hilarious quest to be taken seriously as a legit actor, Joey is thrown into the reluctant role of a talk show host at a fledgling cable network called The Comfy Channel. As Joey starts to navigate the talk show circuit, he is joined by his often misguided manager and team played by a hysterical cast, including Adam Ray, Jamie Denbo, Katie Wee, Punam Patel and Jordan Black.
RETURN OF THE MAC is executive produced by Donnie Wahlberg, Jenny McCarthy and Joey McIntyre, along with Tim Gibbons (“Curb Your Enthusiasm”), Paul Greenberg (“Best Time Ever with Neil Patrick Harris”) and Jenny Daly (“Storage Hunters”).
​HASHTAG:  #ReturnoftheMac
Twitter & Instagram Handles:
@PopTV