Jonathan Tropper’s fantastic and hilarious book, This is Where I Leave You,  hits theaters on September 19th. If you haven’t read it yet, it’s a must read. I’m currently reading it and absolutely LOVE it. Everyone I know raves about this book. The movie looks outstanding with a stellar cast  that includes Tina Fey, Jane Fonda and my favorite – Jason Bateman who is seriously a fave of mine. Love him!

You can also join Warner Bros. Pictures’ #TIWILY book discussion on the film’s Facebook page each Wednesday, and take part in the conversation for a chance to win signed movie posters and a trip to the premiere in Hollywood. Awesome!

This is Where I Leave You Movie Trailer

Take a peek at the trailer and I promise you will want to read the book and then race out to the theater to see this brought to life on the big screen. Doesn’t it look fabulous?

This Is Where I Leave You – In Theaters September 19 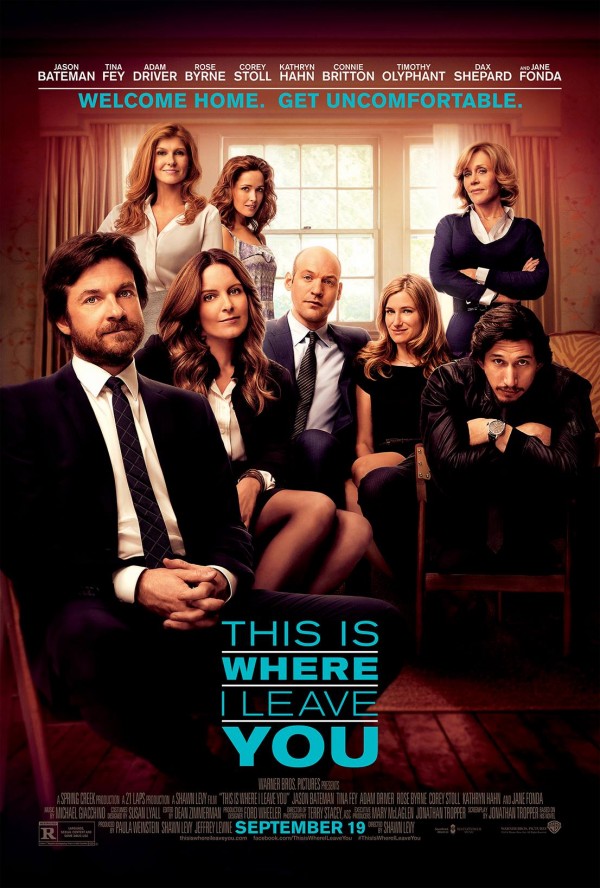 The dramatic comedy “This is Where I Leave You” is directed by Shawn Levy, and based on the hilarious and poignant best-selling novel by Jonathan Tropper. It features a starring ensemble cast including Golden Globe winner Jason Bateman (“Arrested Development”); Golden Globe and Emmy Award winner Tina Fey (“30 Rock”); and two-time Oscar® winner, multiple Golden Globe honoree and 2013 Emmy Award nominee Jane Fonda (“Klute,” “Coming Home,” HBO’s “The Newsroom”).

When their father passes away, four grown siblings, bruised and banged up by their respective adult lives, are forced to return to their childhood home and live under the same roof together for a week, along with their over-sharing mother and an assortment of spouses, exes and might-have-beens. Confronting their history and the frayed states of their relationships among the people who know and love them best, they ultimately reconnect in hysterical and emotionally affecting ways amid the chaos, humor, heartache and redemption that only families can provide—driving us insane even as they remind us of our truest, and often best, selves.

Note: This post is sponsored  by This is Where I Leave You.  As always, all thoughts and opinions are our own.