Literally stuffed with wands from floor to ceiling, this place is Ollivander’s. When you step into Ollivander’s Wand Shop at Universal Orlando, you will feel as if you’ve been transported to the wand shop of lore in Diagon Alley. 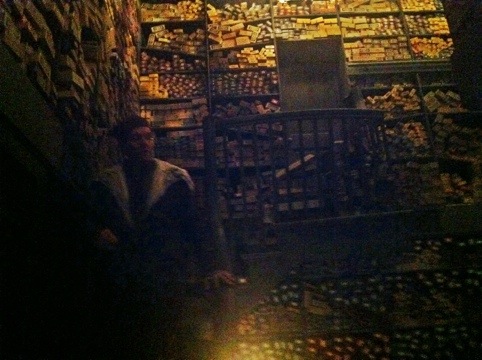 The shop is itsy bitsy and filled to the brim with a zillion wand boxes. There is a line for entry into the section of the store where there is a wand selection magical demonstration. Yes, there is a line, but it moves pretty quickly, as about 25 guests step into the shop for each 5 minute “show” where 1 lucky guest gets selected to “choose their wand” or I should really say, “see which wand chooses them?”

Kenzie was amazed at the show and definitely thought every spell and bit of magic was 100% genuine.

She just kept repeating, “I LOVE this so much! I LOVE it. I LOVE it.”

Buying a Wand at the Wizarding World of Harry Potter:

After the demonstration, everyone is shuffled through a small door into the main wand shop – which is equally small but full of all kinds of wands for the kids or parents to touch, feel, and then purchase if they so desire.

Even though these wands are not toys, and are made of ceramic, we knew we were going to let the kids buy a wand. They are obsessed with Potter and have been dreaming of owning a wand for months. Luckily, their purchase did not disappoint. Honestly the kids even have been sleeping with the wands and/or wands in boxes at night!

Both my kids spent a good 15 minutes touching and feeling almost every wand in the shop. Ultimately, Kenzie chose Ginny Weasley’s wand and Kyle went with Harry Potter’s wand. The wands are not cheap – but I swear they are well worth the $32.95 we spent on each one. They are beautiful but even more importantly, my kids have probably played with their wands for no less than 100 hours since we bought them 3 weeks ago. Kenzie and Kyle play “Harry Potter” at home where Kenzie speaks in a British accent and both kids cast spells about the house or yard or pretend to battle bad wizards while escaping on broomsticks for hours on end. They love it and it leaves me lots of time to get stuff done on my own when I’m not joining in on a potions class with them. 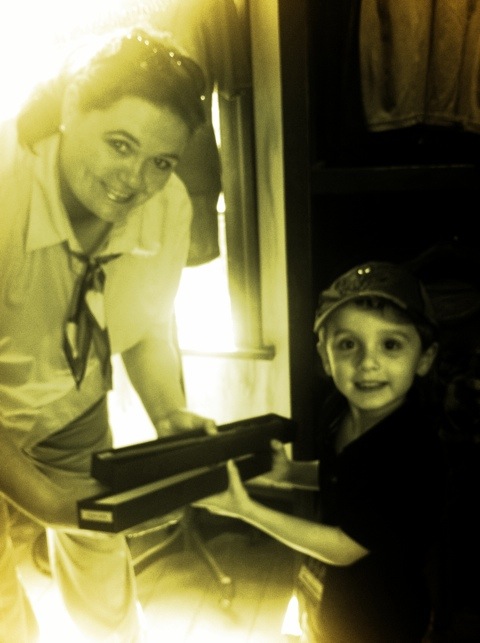 Here’s Kyle after selecting his wand. Isn’t he cute?

Thanks to Universal Orlando for providing my family and I complimentary park passes and a VIP guided tour through their theme parks. As always all thoughts and opinions are my own.