Have you met Peppa the Pig yet? She’s a cutie.

Peppa Pig is a longtime favorite with British children who adore watching Peppa’s lively adventures with her family and friends. The award-winning series is the number one program for preschool-aged children in the U.K and now Peppa Pig airs on Nick Jr. daily Monday – Friday at 2:30 PM. 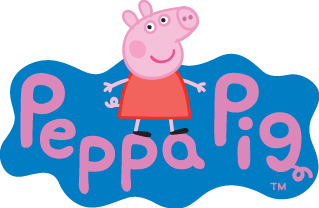 Kenzie and Kyle had never seen Peppa Pig before as don’t typically watch TV in the afternoon – I’m also very selective about what I let my kids watch.

So, when we received this screener and it sounded like a “fit”, I let the kids have a go at the show. They INSTANTLY fell in love with Peppa – who speaks in a British accent. Her adventures were really cute and the kids were captivated by her demanding to watch the show again and again and yet again!

And I admit Mom fell  for Peppa Pig too. I found the show to be educational and engaging and the content was totally safe and appropriate for my preschool and Kindergarten aged children which was just wonderful. Really Peppa Pig was a breath of fresh air compared to so many shows on TV that my kids accidentally stumble on that I find force kids to grow up to fast instead of just relishing the preschool years.

Peppa Pig reinforced the skills I want my young kids to grab from a TV show – counting, playing outdoors, and appreciating family time.

Peppa and her Piggy family snort all the time too – as only pigs can do – which the kids will find hysterical – at least mine did!

Disclosure: Thanks to Childs Play PR for sending us screener episodes of Peppa the Pig to facilitate our post