Love it! What better combination could there be than that of  Bora Bora style bungalows with the magic of Disney? Staying at the newly re-imagined Polynesian resort is on my Disney wish list for 2015.  Last year, new additions included Pineapple Lanai, a quick service location that offers popular Dole Whip treats, and Lilo’s Playhouse, a whimsical activity center for kids to hang out at if parents are looking for some time out on on their own. And now, Disney Vacation Club is expanding with all kinds of new accommodations at this classic Disney resort, one of the originals from 1971.

These fabulous new Villas and Bungalows are on sale now for Disney Vacation club members too! 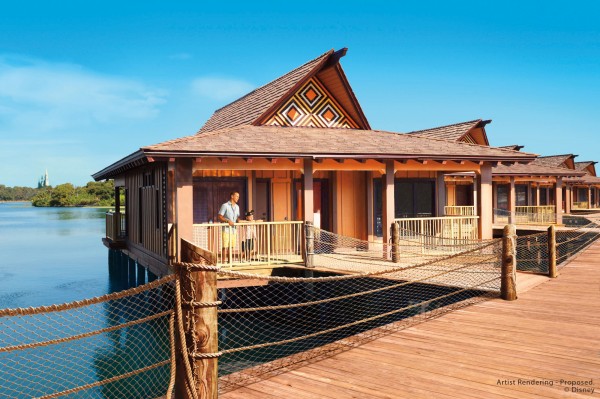 There will be 20 Bora Bora style Bungalows on the Seven Seas Lagoon  — these will sleep up to eight guests each in a two-bedroom, home-like setting. Private decks will feature a plunge pool where Members and guests can view fireworks over the Magic Kingdom, complete with the soundtrack that can be heard through an individual sound system. They will also have front-row seats to the Electrical Water Pageant, a playful nighttime water parade in the Seven Seas Lagoon.

This new upgrade will also include  360 Deluxe Studio Villas. Awesome!