Memories and Photos from the Goodbye Christopher Robin Premiere! That’s just one of the many marvelous quotes and inspiration shared with the world within the pages of Winnie-the-Pooh. Along with so many other wonderful quotes like the one above, it’s easy to see why the world has been smitten with Pooh for nearly 100 years! For more about the true story behind Winnie the Pooh, add Goodbye Christopher Robin to your MUST WATCH movie list. This film hit theaters starting October 13th and both Kenzie and I absolutely LOVED this heartfeltmovie and learning so much more about the true story of just how Winnie-the-Pooh came to be.

Memories and Photos from the Goodbye Christopher Robin Premiere 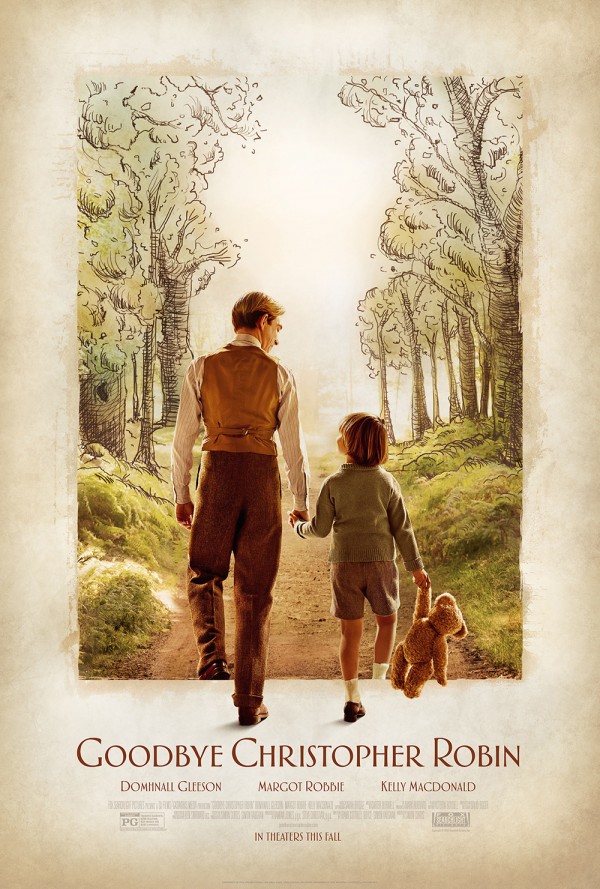 Experiencing the Red Carpet- or make that a Green Carpet!

Kenzie and I had the chance to hit the “Green Carpet” to connect with some of the cast at the New York City Public Library as they arrived to their premiere party. It was a pinch me evening when both of us couldn’t believe we were so lucky to join in such a marvelous and special event. 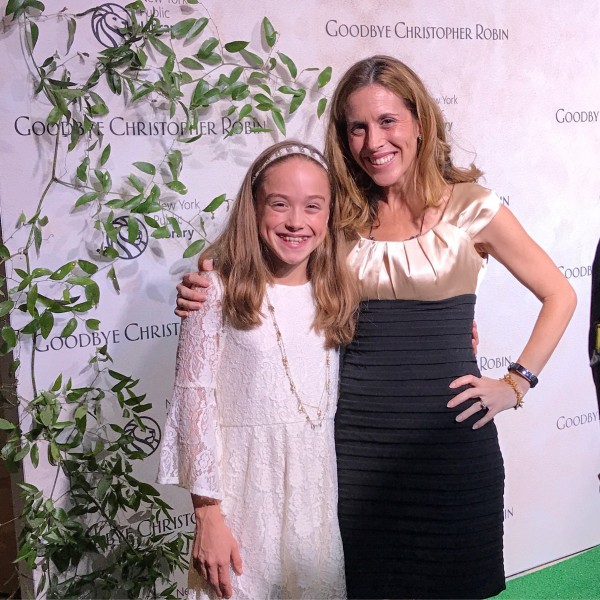 The carpet was actually GREEN to go with the 100 Acre Wood theme. Desserts were even little Pooh cookies with honey – of course!

We chatted with some of the stars and even snapped lots of photos. We talked with Will Tilston who plays Christopher Robin and he was simply delightful. We loved his British accent and he told us they actually filmed the move in the REAL 100 Acre Wood that inspired the story. And as a friend of mine said best, in order to NOT let life imitate art, we did NOT ask Will for a photo – given that his character in the movie suffered so much from his fame. Instead, we simply enjoyed the moment. 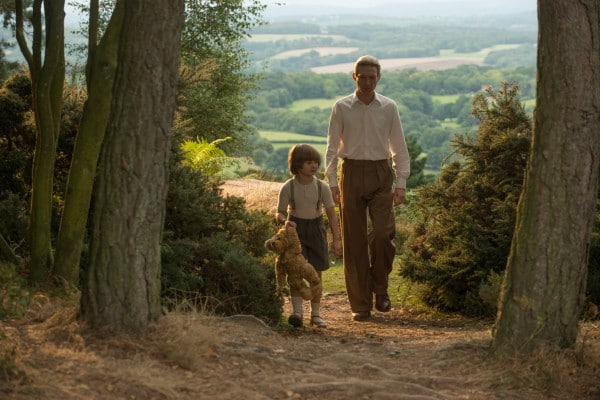 We also noticed the cast was very protective of young 10 year old Will which we thought was wonderful. Domnhall Gleeson explained with the content of this movie, all the cast was very conscientious of the coming fame to this 1st time child film star!

Domnhall Gleeson was genuine and kind with his time chatting with a group of us all about his portrayal of AA Milne. He loved spotting the real tiny plush Piglet at the premiere party just like Kenzie and I too! 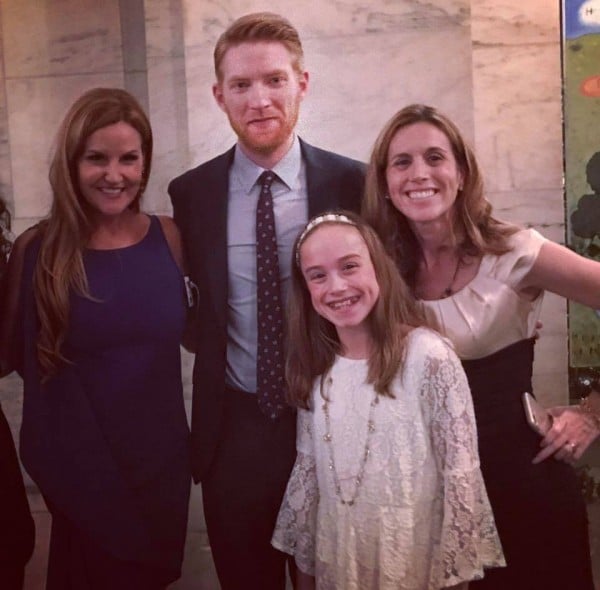 Scenes from the Premiere at the New York Public Library

We spotted the REAL plush toys owned by Christopher Robin that inspired Winnie the Pooh written by his father AA Milne. Loved them so much! Don’t they look so loved? And Piglet was our favorite – so absolutely tiny!!! The original Winnie-the-Pooh bear was given to young Christopher Robin for his 1st birthday by his mother – nearly 100 years ago in 1921! 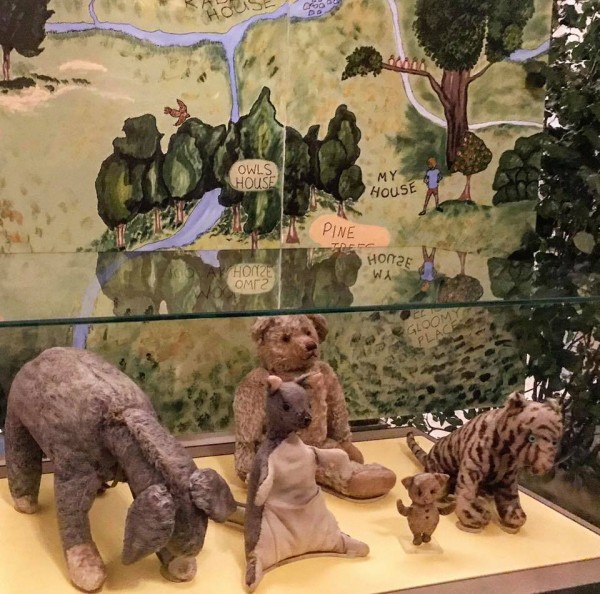 And of course the New York Public Library was gorgeous.  Neither of us had ever been in the Library before so we loved it exploring this beautiful building and experiencing a fancy evening together with good friends – and the movie stars! 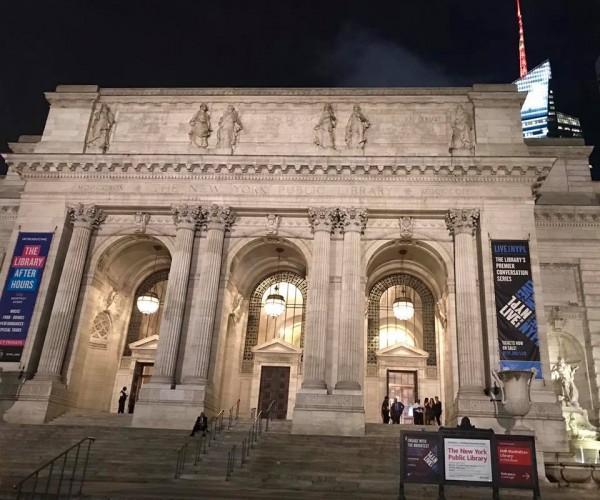 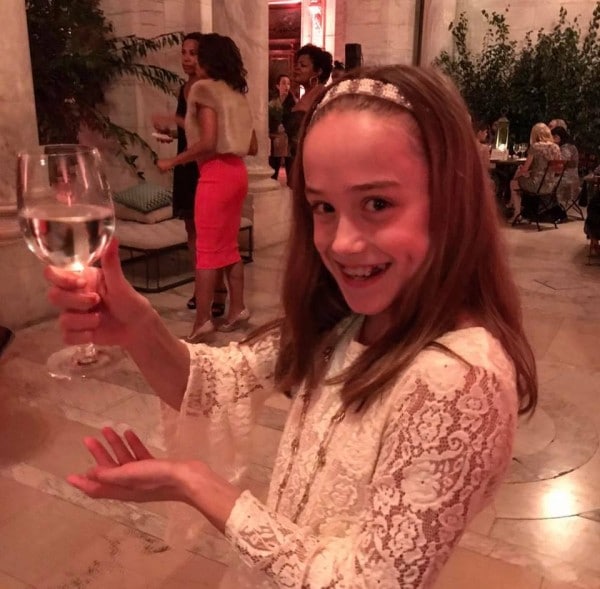 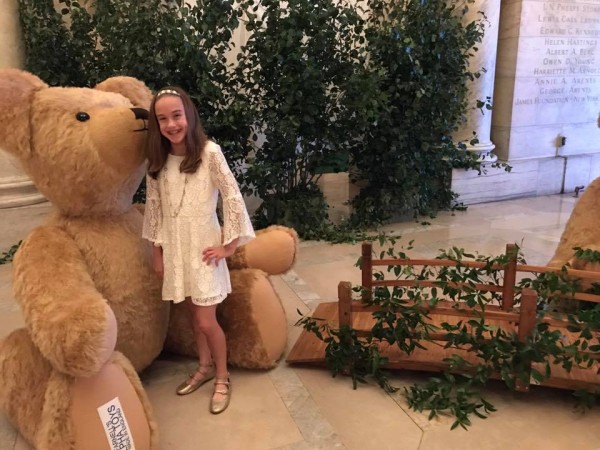 The Sad Side of Goodbye Christopher Robin

Sadly, the true story behind Pooh is a bit darker than you might assume given the happy Pooh has brought to millions. I don’t want to spoil the movie, but young Christopher Robin suffered from the fame thrust upon him in the 1920’s when his beloved Winnie the Pooh became a world sensation in the stories told by his father AA Milne. Christopher Robin never touched a penny from the Pooh fortune but did seem to reach an understanding with his father how Pooh brought joy, happiness, and inspiration to the world –which was his Father, A.A.Milne’s  original goal in writing Winnie-the-Pooh after his traumatic experience as a solder in World War I.

I highly recommend this film for kids 11+ and of course all adults. It was so well done – the scenery is gorgeous, the acting is fabulous, and the true story of Pooh – such an iconic figure in almost everyone’s lives – is indeed beyond fascinating.

GOODBYE CHRISTOPHER ROBIN gives a rare glimpse into the relationship between beloved children’s author A. A. Milne (Domhnall Gleeson) and his son Christopher Robin (Will Tilston), whose toys inspired the magical world of Winnie-the-Pooh.  Along with his mother Daphne (Margot Robbie), and his nanny Olive (Kelly Macdonald), Christopher Robin and his family are swept up in the international success of the books; the enchanting tales bringing hope and comfort to England after the First World War.   But with the eyes of the world on Christopher Robin, what will the cost be to the family?

Thanks to Fox Searchlight for paying our travel expenses to attend this special event. As always, all thoughts and opinions are our own.

4 thoughts on “Memories and Photos from the Goodbye Christopher Robin Premiere #GoodbyeChristopherRobin @FoxSearchlight MUST SEE MOVIE!”