Did you know that  “Saving Mr. Banks” is the first film to depict the iconic entrepreneur Walt Disney ? If you love all things Disney or have ever considered Mary Poppins  a favorite movie, I promise you’ll find Saving Mr. Banks fascinating.

Here’s the scoop as I share my thoughts with a Saving Mr. Banks Movie Review. I had the chance to preview Saving Mr. Banks while in California last month and we actually screened it what was once Walt’s private screening room. Talk about an experience that gave me goosebumps.

Saving Mr. Banks is based on a true story and it’s a powerful one.

Saving Mr. Banks takes you on an emotional journey about Walt Disney’s efforts to fulfill a promise he made to his little girls to turn the Mary Poppins stories, by P.L. Travers, into a movie. Walt’s promise turned into a lifelong quest as P.L. Travers was beyond reticent about letting her beloved Mary Poppins get disnified. In Disney’s last ditch efforts to get Travers to release the rights to the movie, he invited her out to California – and Disneyland – to try to get at the heart of her story, her worries, and to see if she could collaborate with his team on the movie in the hopes she’d let him ultimately have the rights to make Mary Poppins into a film. 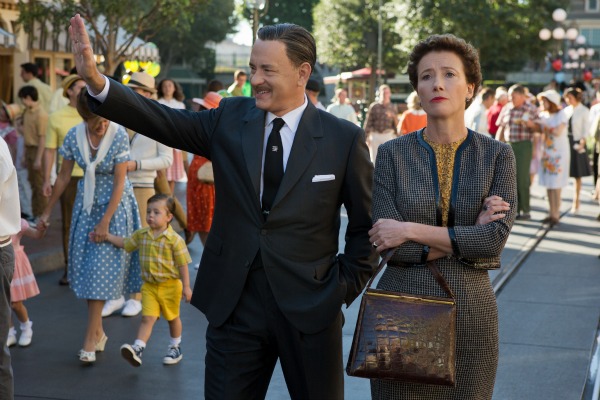 Tom Hanks plays Walt Disney and you’ll see the magic and happiness of Disney portrayed in the man, while Emma Thompson perfectly displays the sad and crutchedy Travers who was reluctant to release her beloved Mary Poppins to Disney studios. The story goes back and forth between scenes from P.L. Travers childhood and the origins of her Mary Poppins story to the struggle between her and Disney studios as she refusing to sell Walt the rights to the movie – which would actually make Mary Poppins a household name worldwide.

While watching the movie, you’ll fall in love with the Mary Poppins story again and the first thing you’ll want to do when the movie ends is run out and watch Mary Poppins with your family.

Check out the Saving Mr. Banks official movie trailer for a taste of the magic.

I don’t want to give too much away but this is one of the most touching and amazing movies I’ve seen all year. It was very well done and I found it beyond fascinating to learn more about Walt, the movie making process, and the story of Mary Poppins.

For our preview, Disney tricked out the lobby area with sweet treats – much like they did for Travers during her sessions working with the screenwriters and Sherman brothers on the music and script for Mary Poppins. So fun! They also had all kinds of historically images of Walt and Travers along with concept art from Mary Poppins. Talk about a Disney fans dream!

When Walt Disney’s daughters begged him to make a movie of their favorite book, P.L. Travers’ “Mary Poppins,” he made them a promise—one that he didn’t realize would take 20 years to keep. In his quest to obtain the rights, Walt comes up against a curmudgeonly, uncompromising writer who has absolutely no intention of letting her beloved magical nanny get mauled by the Hollywood machine. But, as the books stop selling and money grows short, Travers reluctantly agrees to go to Los Angeles to hear Disney’s plans for the adaptation.

For those two short weeks in 1961, Walt Disney pulls out all the stops. Armed with imaginative storyboards and chirpy songs from the talented Sherman brothers, Walt launches an all-out onslaught on P.L. Travers, but the prickly author doesn’t budge. He soon begins to watch helplessly as Travers becomes increasingly immovable and the rights begin to move further away from his grasp.

It is only when he reaches into his own childhood that Walt discovers the truth about the ghosts that haunt her, and together they set Mary Poppins free to ultimately make one of the most endearing films in cinematic history.