Win it! We’re giving away 5 copies of the brand new Shopkins Chef Club Movie DVD. Shopkins fans will be thrilled that we now have the first-ever Shopkins movie available in stores – and it also marks the screen debut of the Shoppies characters, alongside Shopkins’ fan favorites Kooky Cookie, Apple Blossom, Lippy Lips and Cheeky Chocolate in Shopkins Chef Club. And for now, the DVD INCLUDES FREE LIMITED-TIME KOOKY COOKIE TOY! So fun! To celebrate this release, we’re hosting a Shopkins Chef Club Movie DVD Giveaway with 5 winners. See below for entry details. 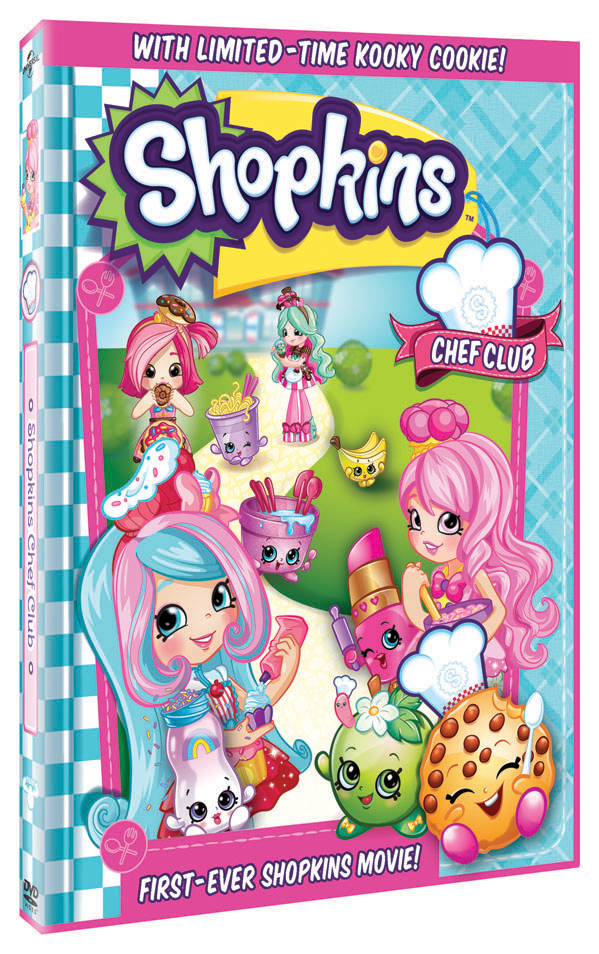 Official Synopsis of the Shopkins Movie

The first-ever Shopkins movie marks the screen debut of the Shoppies characters, alongside Shopkins’ fan favorites Kooky Cookie, Apple Blossom, Lippy Lips and Cheeky Chocolate in Shopkins Chef Club, arriving on Digital HD on October 18 and DVD October 25, 2016 from Universal Pictures Home Entertainment.  Based on the colorful world of Shopville, Shopkins Chef Club tells the tale of inanimate objects coming to life and their adventures with their best friends, the Shoppies.  With the introduction of a cast of new Shopkins, new songs and a range of quirky costumes, the DVD and Digital HD include just the right ingredients for a cartload of laughs!

About Shopkins: Since launching in 2014, Shopkins has become a global phenomenon with each season offering 140 different Shopkins characters to collect, complemented by a range of Shoppies Dolls. Its animated webisode series has amassed nearly 100 million views on YouTube alone and the Shopkins 12-Pack was the #1 selling toy in the United States in 2015 according to The NPD Group.  Shopkins, made by Moose Toys, is a breakthrough collectible line of super cute, tiny characters that has resonated strongly with children across the world by inspiring imaginations.

Prizing: 5 winners will be selected to each receive a copy of the new Shopkins Movie Chef Club on DVD.

Eligibility is for US Residents only.

I’m hoping to win the #Shopkins DVD #giveaway from @ClassyMommy