The Blue Umbrella, the short that will precede Monsters University in theaters, is the most realistic animation I’ve ever seen in my entire life. This touching and beautiful short is not to be missed. We had a chance to sit down with Director Saschka Unseld of “The Blue Umbrella” during out visit to Pixar this past April when we first viewed The Blue Umbrella and hearing his thought process on story development and the animation process was fascinating.

Check out the trailer here for a quick taste of The Blue Umbrella. The score is gorgeous and the overall story is heartfelt and captivating.

To be clear, this new Disney Pixar short is 100% animated, but it is so real that I honestly did not think it was actually animation after I saw it in the theater.  The technology is seriously that good that I somehow thought the animators superimposed their animation upon real footage of a cityscape.

Here’s Saschka Unseld’s thoughts on why his animation is so amazing and revolutionary as truly all of us who prescreened The Blue Umbrella were WOWED and floored by the realism in this animation. 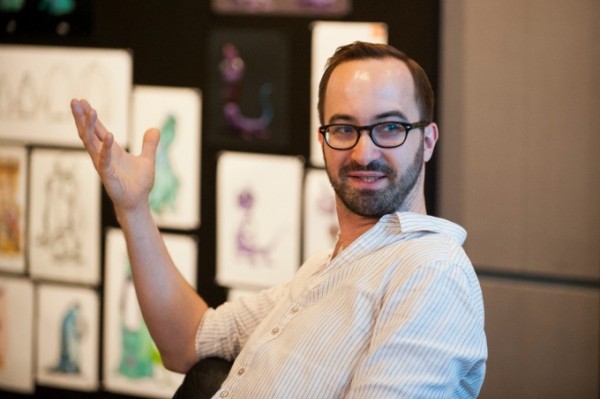 His thoughts Thoughts on why this animation is so realistic and incredible:

Generally on every movie that comes out.  There’s new technical innovations that are being used.  Um, and especially with the short films, you can test something out without putting into jeopardize the production schedule of a feature, which is kind of, if you don’t hit the theatrical release date there, that’s a bigger problem.

or a fan I did a photo series of just sidewalk asphalt plates, and the way cracks one there, and they way they kind of, in some areas there’s more kind of these black dots from chewing gums, and on the side there’s something from a tree which probably stands 10 meters down the street.

And just the, the complexity and the beauty of all these details you can see in, in, in the city.  And a lot of it was me and the team going on trips into the city and looking at all these details, like, on the side of a newspaper box there’s streaks of probably someone tying their shoelace, and then you have the streak of the black rubber from the shoe there.

Or the way these things are moved around has a certain way.  There’s scratches on them.  Everything kind of tells a story to it.  And a big, big struggle in the beginning was getting people to change how they work.  Like, it was amazing how much people are used to doing things in a more stylized, cartoony way.  The first version of the mailbox, which you see in the beginning.  We gave photo references to the modeler to build it.

Relatively straight forward, you would think, and then we looked at it, and it was, like, somehow this looks, doesn’t look real.  Something is wrong.  It was really hard to tell.  And we had to really look into the details, and it was… The size of the screws were slightly too big.  Um, it was the way since a mailbox is made out of this kind of folded metal, the sharpness of a bend has certain physical restrictions.

And that was just wrong.  It was like all these details that are based on a manufacturing process of these things, or how thick something is, or all these things were slightly off, and all that gave the overall picture of this doesn’t look real.  So a lot of it was figuring out, no, why are certain things in a certain way, and kind of making people not… So much of what you do is kind of….this is how I used to do it the last 10 years, and you’re not even aware of it.

You put tiny details in there and there and there and stuff like this.  And it’s kind of like when you paint, you have certain mannerisms.  And it was kind of getting rid of those mannerisms, and really having people look at those things.  And I think that made the… At least for me, that made a big difference between it looking like a normal Pixar film and looking so different.

Um, but I think a lot of it was just approaching it creatively differently.  I’m in love with details in reality.

Where did the story idea come from?

I was living here (San Francisco) four years or something. And it really rarely rained.

And I went for a walk through the city, and I saw an umbrella someone had thrown away on the side of the street.  I took a picture of it.  Like, I think, on the, on the Tumblr blog I have, the first post of that is that photo I had taken.  AI had this weird, incognito blog alled Rainy City Tales on Tumblr that I actually was running during the production

That picture stuck with me and, and I was thinking about stories I wanted to tell.  It’s this weird thing.  You see this umbrella and it’s just an object, but it looks so sad, and it looks kind of so down and drenched and the ribs are sticking out.  It’s a super sad sight.  And, I wanted to tell a story with that.

I thought about first the umbrella wants to get back to the owner, and it’s kind of a break-up story, like, someone  broke up with you and you still want to be with that person, and I couldn’t find a happy ending to that, sadly.

I abandoned that story, and then it became, the owner wants to move to somewhere where it never rains, and the umbrella doesn’t want to, but I couldn’t find a happy end for that either.

And then I was thinking of why do I like the rain so much?  And it became me thinking about where I grew up it rains much more than here.  And I really like cities in the rain a lot.  I think they become beautiful.  In Hamburg, in Germany – Eighty percent of the year it’s overcast.  And it rains a lot.

Like, that’s the only story that fits to a love declaration.  It is a love story between two umbrellas.

Which city is the movie based on?

I mean, there is clearly New York, because I went on, on two trips there to take photos.  During my pitch, I said the city comes to life, and everyone’s, like, yeah, okay.  And then I, after the pitch I said, oh, by the way, when I said that, this is what I mean, and I showed a test I shot on my phone and animated on my computer at home.  And that was exactly the character two blocks down from me, and we kept that character.  So that’s from San Francisco.  There’s a building that is from a Ratouille research trip (in Paris) 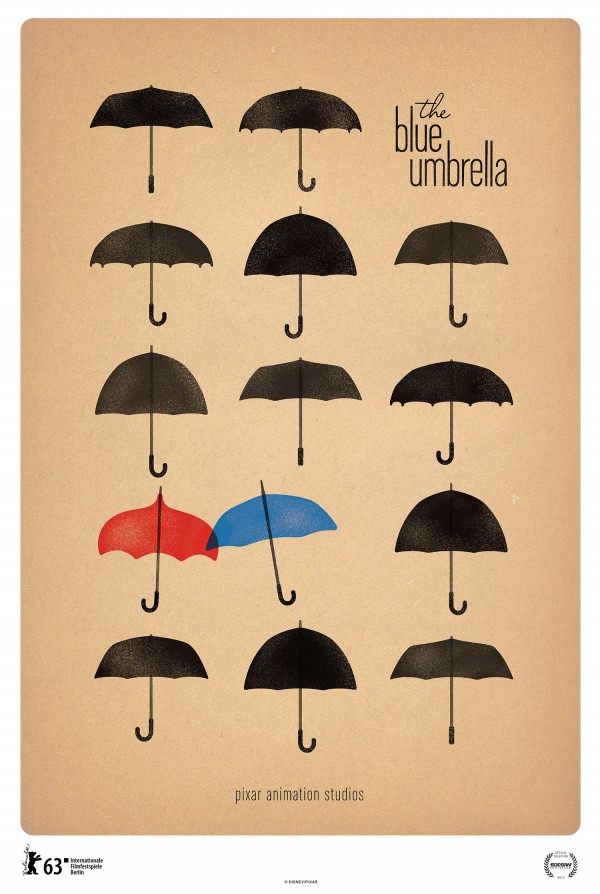 2 thoughts on “Inside Scoop: Disney Pixar’s The Blue Umbrella #MonstersUEvent”