Hanging out with the passionate storytellers and animators at Pixar was incredible. This team is genius and getting a behind the scenes look at their movie making process was priceless. The technology, the vision, the artistic skill, the imaginations, the teamwork, the story, the animation process – so many critical pieces to the puzzle that ultimately make a Disney Pixar movie.  I loved every second of my school day – and took a ton of notes as I found it all so fascinating. Tough to share it all in a blog post so I’ll just give you a cliff notes version of each course in my Monstrous Class schedule.

ENGLISH 101: How to Tell a Great Story with my Instructor, Instructor: Kelsey Mann (Story Supervisor)

The story development process and how to draw a character from MU.

Loved meeting Kelsey Mann who was super enthusiastic and passionate about his work. Watching him draw our beloved Monsters University characters perfectly in a nanosecond was very cool too. He explained how in the early part of the process the team is gathered together with lots of pads of paper and pens everywhere and they literally just riff ideas and jokes together so they can pitch together a story.

I found it especially cool how Kelsey could teach us to draw our own “monsters” really easily. Our results were surprisingly decent with his quick directions on how to make our strokes we were basically able to roughly “mimic” his perfect version of Mike. 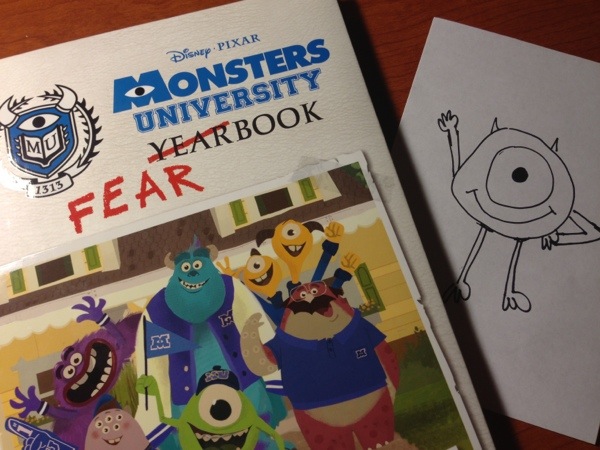 Here’s my little guy. I can’t believe I drew this so well as I am SO not artistic. But it really does look like Mike!

SOCIOLOGY 203: The Deconstruction of a Character

The design of college-age Mike & Sulley, and creation & design of new characters in the film.

This was one of my favorite courses as it was beyond interesting to see how they could literally deconstruct an existing character to figure out how to make him look YOUNGER and college aged.The first thing they did was ask all the Pixar employees to bring in their Senior Class Photos so they could figure out what makes a college student look younger…. because in college you are basically an adult but something is definitely DIFFERENT as you are so much younger. 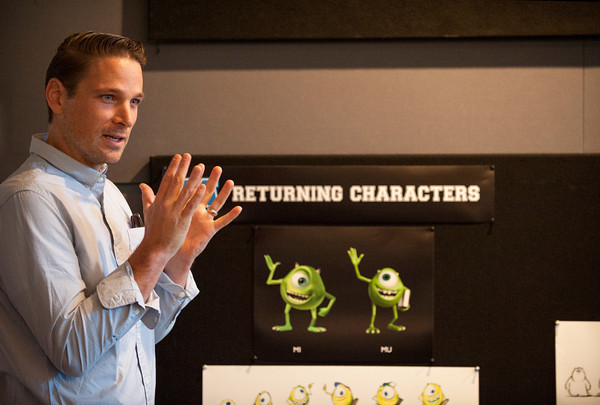 In the case of Mike, they saturated his color, shortened his horns and softened his pads and thinned him out a bit. Still that wasn’t enough. How do you make an EYEBALL look young right? They realized they needed a visual cue – so added a retainer and his baseball cap. Genius right?

For Sully, they made him thinner and tousled his hair to give him that college look. 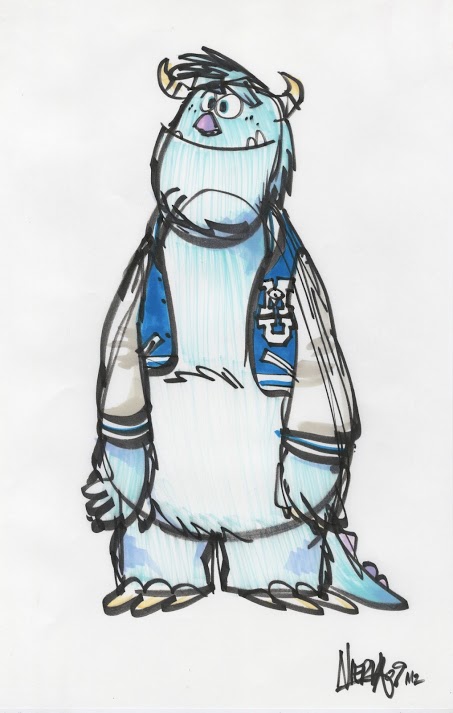 Plus we also learned all about the creation of the background “monsters” in the movie too. Together, the team works to make srue there is the right combination of “shapes” and “colors” for all the background students in the scenes. They even have names for the shapes and types of all these critters. Fungus, Slugs, Charlies, Blocks, Spifs, and Pills. Plus a whole bunch of wacky “one offs” that are crazy shapes.

Learn about creating and “monsterizing” the world of MU.

Another super fun class where this team lead us through the development of the MU campus. They visited lots of real life college campuses to be sure the version they created would be just like a college campus too but then they needed to “monsterize” it. To  make it more “spooky” they were able to play with the architecture and landscaping to transform a regular campus into MU. 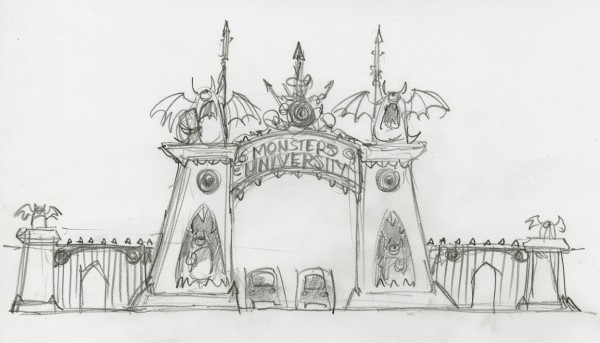 When it comes to lighting, they think so much more about this than we, as the audience, ever realize. Instead, they work with lighting in a way that the audience “FEELS” it happening. They want to subtley and carefully support the story via light. We don’t notice this – unless we’re talking about it like we are now. For instance, they carefully chose colors for all the Frats and Sororities.
Light is used in the film to signify the status of friendship too. As the movie progresses, hardworking Mike is in the light and then Sulley movies to the shadows. The scary Dean has scenes that become very dark light wise, and her colors are also a deep dark red.
DRAMATIC ARTS: Bringing a Character to Life

How the animation process works, and view an animation demo on a linux machine. 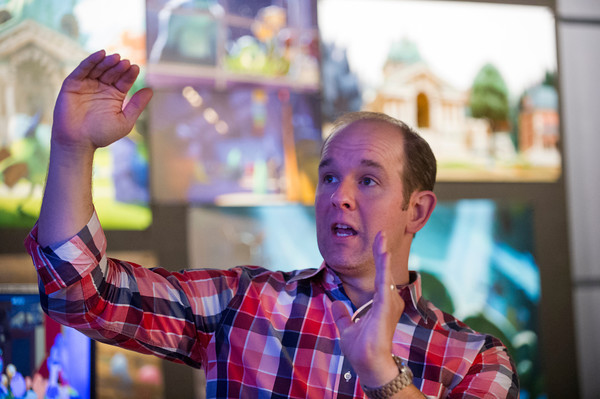 Super cool. We got to see how the animation team literally animates everything – from dancing to swaying to all kinds of antics using a very cool computer to articulate all the joints and movements.

A presentation on the use of Global Illumination in MU and The Blue Umbrella.

This course was all about the high tech parts of animating a film like Monsters University and let me tell you it takes a whole lot of tech to make our beloved Pixar films. The good news is that the technology keeps improving which means Pixar movies just keep getting better and better. Honestly, parts of Monsters University look so REAL to me I almost thought animated characters were superimposed on real life footage. The reason the animation is so great is because the tech has continued to improve and they are able to simulate more and more so that it genuinely does look REAL.

To explain this to the best of my ability – forgive my novice mistakes – basically rendering and simulation are where the magic happens. Each frame of the movie takes 29 hours to render and it would have taken 10,000 years to render this movie on 1 computer. ( There are 24 frames/ 1 second of the movie which is 90 minutes long)

Simulation is the motion calculated by software that is too complex to be animated by hand. For instance, there are too many hairs, blades of grass, threads in fabric to draw. Enter the computer! The simulation adds texture to the movie.

Monsters University has so much texture, you will be FLOORED at the quality of the animation. Simply amazing.

Note: Thanks to Disney for paying our travel and expenses to attend this press event for Monsters University. As always, all thoughts and opinions are my own.