Up Next: I’m in New York City and raring to go bright and early as I can hardly wait to step on board the Disney Fantasy cruise ship this morning. 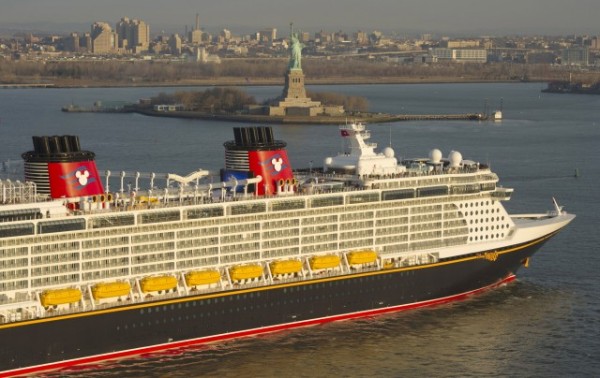 I step on the boat at 8:45 but I think I’ll be on the pier snapping photos by 7 AM as I can’t wait to see Dumbo on the stern and those Mickey Ears.

Rumors about about who will be named Godmother. Entertainment and the Godmother will be revealed tonight during the Gala. I can’t wait to attend this glitzy event on the Fantasy. I feel like I’ll be stepping back in time to the gilded cruise ship age of the early 1900’s. This will be a party to remember! Last year’s Christening of the Disney Dream was incredible. The kids attended with Mike and I and it was quite an event – Jennifer Hudson singing as godmother, characters galore, a parade, fireworks, and even a helicopter flying over the ship to pop a giant bottle of champagne on the stern.

Tonight, Mike will be heading into the city by 5 PM to accompany me as my date as tonight is an “adult only” affair. Many of my New York based blogging friends will be in attendance too which will be fun and of course lots of celebrities will be in attendance. Rumors say Jerry Seinfeld will be on board and I imagine many other “ABC” based media, TV, and movie stars will be there. Last year we sailed with Whoopi Goldberg from the View, John Stamos and more.

The big question is about the reveal of the Disney Fantasy Godmother. Who do you think it will be?

In the cruise industry it’s often royalty or a famous singer. Disney even had Tinkerbell, a character, as godmother on one of their ships so that is a possibility.

A few online rumors include:

As soon as it’s revealed I’ll be posting the news.

Here’s our Disney Fantasy Christening itinerary for the evening: