So sometimes we do crazy things for our kids. Blame it on love. Last week was a fun one that I’m sure we’ll remember for a long time. 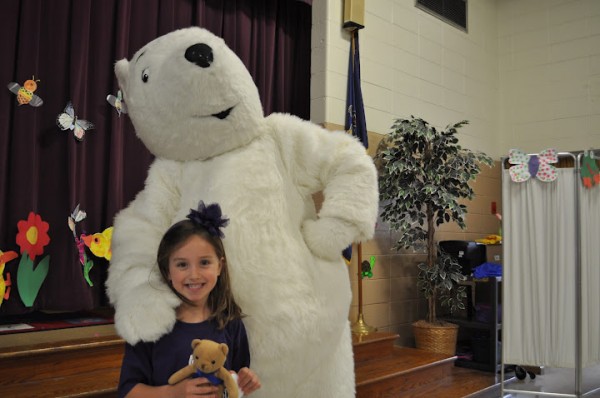 He played the “naughty” bear who wouldn’t listen to the teachers too – so this meant Mike did lots of gesturing, butt wiggling, and dancing while literally BOILING inside this humongous Polar Bear suit. Of course I was the one who volunteered Mike for the gig – but he was a great sport about it….. I was a “Bear Guide” to help the bears to and from the assembly as they had to perform their show and duties 2 times during the afternoon. Mike had a blast and did fabulous – but yes this costume was like a form of torture.

Here’s his video of his routine – and yes the little kids loved it.


During our various 10  minute breaks for the Bears to get a breather, Mike would pull of his bear head and I swear I thought he might have a heart attack. This is a guy who runs under 16 minutes for the 5K but I’ve never seen him so red, sweaty or exhausted looking. As if it wasn’t hot enough – he was also basically blind in the suit – they had you see through the nose but his nose got all fogged up from the steamy heat! The costume is supposed to have a fan running in it – but there was no battery included so Mike was stuck with the steam!

He says if he ever gets the pleasure to wear the ordinary “Teddy Bear” Cubby suit again – as he wore it at Christmas to hand out t-shirts to all the kids in the school – that he will relish it with delight.

And I’m sure he’ll get just that chance – Kyle will be in Kindergarten soon and 2014 will be here before we know it.