When Paul Rudd and Leslie Mann walked into the room to be interviewed for their upcoming comedy movie This is 40, that releases on December 21st – this Friday,  I could quickly see that this was going to be an entertaining 20 minutes…

Both Leslie and Paul were amazing in person. They were just as charming and funny during our round table interviews as they were in this hilarious film. You can check out my review on the This is 40 here and read our interview scoop below. 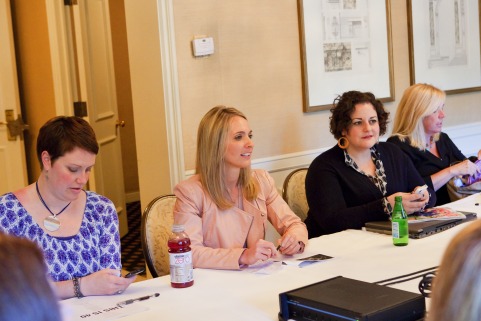 Of course, I’d be remiss not mention how my eyes were immediately drawn to Leslie’s leopard print shoes. It seemed like a bold move to pair them with her sweet, turquoise dress ensemble, but I must admit that it paid off nicely! Then Paul swooped into the room, crowded with 11 women and 1 man, and did what any normal guy would do and jumped right into sports chatter with our fellow blogger Ben.

Paul: How’s it going, man? Did you catch any of those games yesterday? Can you believe that? RG3, man, hurt. I wonder if he’s going to make it in time for the playoffs? 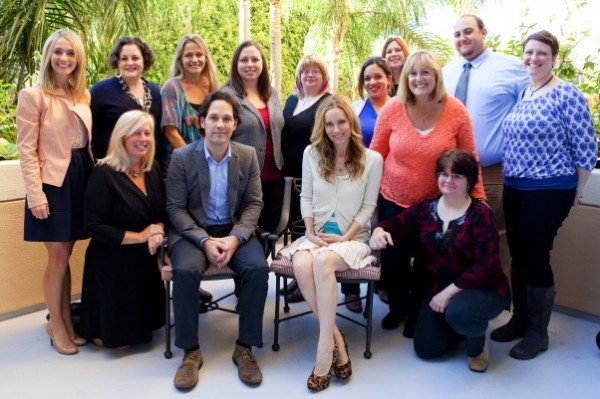 Leslie on whether the movie (written and produced by husband Judd Apatow) was about their real lives:

I don’t know how he describes it, but to me, it isn’t our life. It’s more like everybody’s life. It feels emotionally that it’s truthful to what we go through, but it’s also truthful to what all of my girlfriends are going through right now and what they struggle with.

Leslie on how she and Judd talk to their two daughters (who also play the daughter roles in the movie) about the scenes from the movie:

Well, our girls are pretty smart. And after work, we’ll sit down and have dinner together and have creative conversations about all of this stuff and we talk about it in a different way. We understand that it isn’t Maude’s in on it and Iris is in on it. They’re both like just fantasizing about what they would like to do. Like for me, I sometimes fantasize about screaming at mothers at school but I would never do it. But we can have these conversations, these very imaginative conversations, about things we would like to do. They know that it isn’t mommy and daddy’s problems. It’s having fun with it and having fun with being emotional, and it’s all okay. All of these thoughts that we have are okay. It’s not bad to have thoughts of screaming at another mother at school. 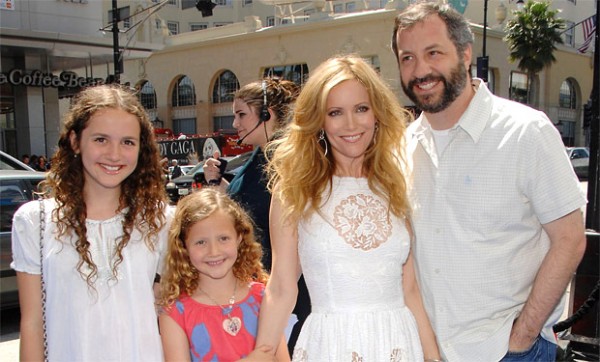 Paul on how his son is affected by his job:

My son when he was about three was going through that phase where he didn’t want my wife and I to talk to each other. And whenever we would just be at home and we were talking to each other, he would say, “Don’t talk.” And I remember saying to him, “Your mom and I are going to talk. We just are.” And he goes, “No, I don’t want you to.” And I said, “Well tough, you’re just going to have to get used to it. It’s good that mommy and daddy talk.” And so then, we would continue the conversation, and he would just at this said, “No, stop talking. Stop talking.” We kept talking. He kept saying stop talking. We kept talking. And finally, he yelled, “Action.” And we looked at him, and he said, “When I yell ‘action,’ you’re not allowed to talk.” And I realize he’s been to too many sets that I have been working on. And then I started laughing so hard at that, and then he started laughing, and then he just went, “Cut.” 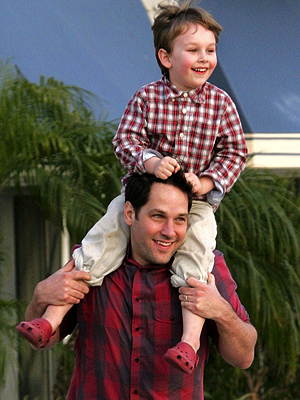 Both Leslie and Paul were amazing in person. They were just as charming and funny as they were in the movie, so don’t forget to check out this hilarious film that releases on December 21st, 2012 – this Friday.

Catch the trailer for This is 40 below:

Visit the  This is 40  movie Official Site

Disclosure: Thanks to Universal Pictures for sending us to cover this press junket and covering our travel and expenses. As always, all thoughts and opinions are my own.

6 thoughts on “This is 40 Cast Interviews: Leslie Mann and Paul Rudd talk kids on the set”