Here’s the scoop on everything you want to know about Disney’s brand new FROZEN EVER AFTER experience and ride opening this JUNE at Epcot in the Norway pavilion. I had the chance to interview Executive Disney Imagineer, Michel, to hear more background about Frozen Ever After and for him to share some inside scoop on the ride experience. Check out my interview for Video Details on Disney’s NEW Frozen Ever After Ride at Epcot below. I’ve also got another video with BEHIND THE WALL footage of the new Royal Sommerhus construction too! (The Royal Sommerhus is the section in the Norway area where guests will be able to meet and greet with Anna and Elsa)

I can not WAIT for the Frozen Ever After attraction to open. My kids, myself, and basically the entire WORLD loves Frozen so this is going to be a fantastic addition to Disney Parks.

NOTE: Just confirmed FROZEN EVER AFTER will open at Epcot on June 21st! HOORAY!!!!! 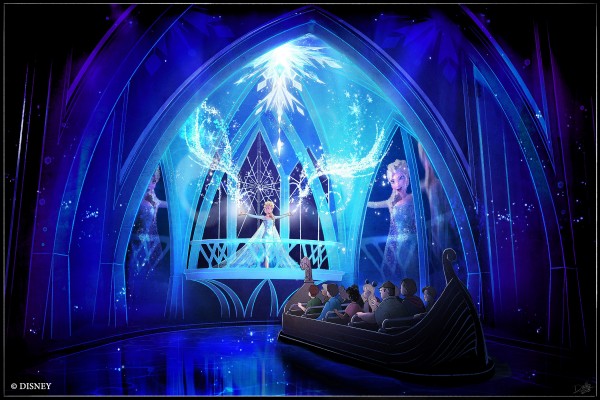 During my interview, the Disney Imagineer also CONFIRMED guests will still go BACKWARDS in their ride boats just as they did on the previous Norway Maelstrom attraction and ride. Cool! Note: Fun detail… the new ride, Frozen Ever After, will use the former Maelstrom ride’s boats for the ride vehicle too.


Official Frozen Ever After Ride Details and Description from Disney

This family-friendly adventure picks up after the events in the blockbuster hit “Frozen” and celebrates a “Summer Snow Day.” A stone archway entrance greets guests to the kingdom of Arendelle. Queen Elsa, Princess Anna, Kristoff, Olaf, trolls and Marshmallow join them on their boat journey through the frozen willow forest, past Troll Valley and up to the North Mountain to Elsa’s ice palace.

We went “Behind the Wall” to check out construction on the soon to be opened stunning “summer palace” home for Anna and Elsa – the Royal Sommerhus. We couldn’t take our own photos or videos, but Disney shared this official clip of the construction with us. No specific opening date is scheduled, but it sounds like the area will be open in June — and many are speculating that there may be “soft openings” starting Memorial Day as both Fantasyland and the Seven Dwarves Mine Train experienced “early” advance soft openings prior to the official opening day.

Behind the Wall Video of Frozen’s Royal Sommerhus Construction

Who else is excited about FROZEN EVER AFTER??????

Fun Facts about Frozen Ever After and Royal Sommerhus Attractions

Disney invited me to attend their summer press preview and paid for my travel expenses. As always, all thoughts and opinions are our own.