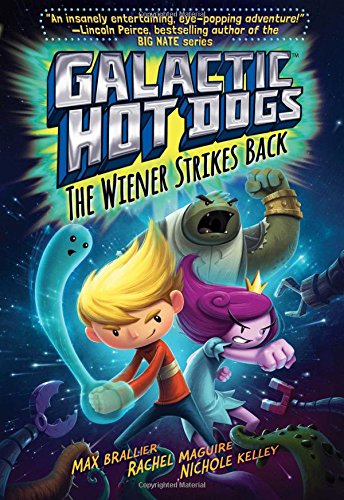 We give the Galactic Hot Dogs, “The Weiner Strikes Back” rave reviews from both Mom and Kyle – adventure, fun, comic style graphics, and lots of digital elements for kids to extend their engagement from page to screen.

It’s great for kids to take a familiar online story and dig deeper into it with a real book — and vice versa. Kyle was already familiar with the Galactic Hot Dogs because it is an island within the popular online game, Poptropica, created by Jeff Kinney, author of the genius Diary of a Wimpy Kid series, so he was very excited to dive into this book series.

This makes for easy, engaging and really fun reading for anyone – reluctant readers or bookworms! Kids love this style for books and we’ve found in our household it is the best way to get my little boy reading! Kids are OBSESSED with the online game Poptropica. My 8 year old and 10 year old love it so much — and Mom loves that it really makes kids think, problem solve, and even do lots of reading along the way as they are playing the game on the computer. The Galactic Hot Dogs is actually one of the islands WITHIN Poptropica so my kids think that is super neat! As you can tell, the Galactic Hot Dog books — as well as the digital experience found on Funbrain.com and Poptropica are a great way to get kids 8-14 excited about reading. Love it!

Here’s Kyle loving the 1st book in the Galactic Hot Dog series. It’s great for kids to take a familiar online story and dig deeper into it with a real book — and vice versa. Kyle was already familiar with the Galactic Hot Dogs because it is an island within the popular online game, Poptropica, created by Jeff Kinney, author of the genius Diary of a Wimpy Kid series. What could go better with wieners than a flying space circus? Nothing! That’s why Humphree’s all jazzed up to sell Galactic Hot Dogs as the official food of Crostini’s Cosmic Carnival and Wonder Circus train. Cosmoe’s not entirely convinced—but once his skills as a monster tamer are unveiled, the deal is done and the Neon Wiener is officially hooked onto the train. Only things aren’t quite what they seem at this circus, and pretty soon Cosmoe realizes he and his buddies are in more danger than ever. To get to the bottom of it all, they have to travel somewhere pretty familiar, providing a glimpse at last into Cosmoe’s past and how he ended up aboard the Wiener in the first place.

ABOUT THE AUTHOR / ILLUSTRATORS
• Max Brallier is the author of more than twenty books for children and adults. He lives in New York City with his wife, Alyse, where he spends his time chasing fortune, glory, and the perfect hot dog.

• Rachel Maguire is an award-winning illustrator and animator. She teaches comics to children, and lives in Massachusetts

• Nichole Kelley is a graduate of the Massachusetts College of Art & Design and has worked as an animator, illustrator, and designer. She lives in Massachusetts.

1 winner will be selected to win Book 2: Galactic Hot Dogs: The Wiener Strikes Back Eligibility is for US Residents and US mailing addresses only.

1. Leave a comment below by May 30th, 2016
2. Daily Comments as daily entries allowed.
3. Tweet the following for an entry: I’m hoping to win the @GalacticHotDogs Wiener Strikes Back book from @ClassyMommy #giveaway #GalacticHotDogs

The Digital Roots behind The Galactic Hot Dogs

The Galactic Hot Dogs adventure started in digital on Funbrain in 2012 – since then it has attracted and engaged reluctant readers across the nation with all kinds of fun digital activities:

– Over 7.8 million visitors to the Galactic Hot Dogs website within Funbrain.com

– Over 30 million Galactic Hot Dogs page views in the last year on Poptropica.com

Get Social with the Galactic Hot Dogs

Note: Thanks to The Galactic Hot Dogs for sponsoring this post. As always, all opinions are our own.