Gigantic news released today out of Universal Orlando that will make Harry Potter fans very happy. The mystery about the upcoming expansion to the Wizarding World of Harry Potter is solved with today’s official news about The Wizarding World of Harry Potter Diagon Alley will open in 2014. This news also means that guest will NOW be able to also board and ride the beloved Hogwarts Express train and they are opening a marquee attraction based on Gringotts Bank.

Here’s a rendering of the new expansion. 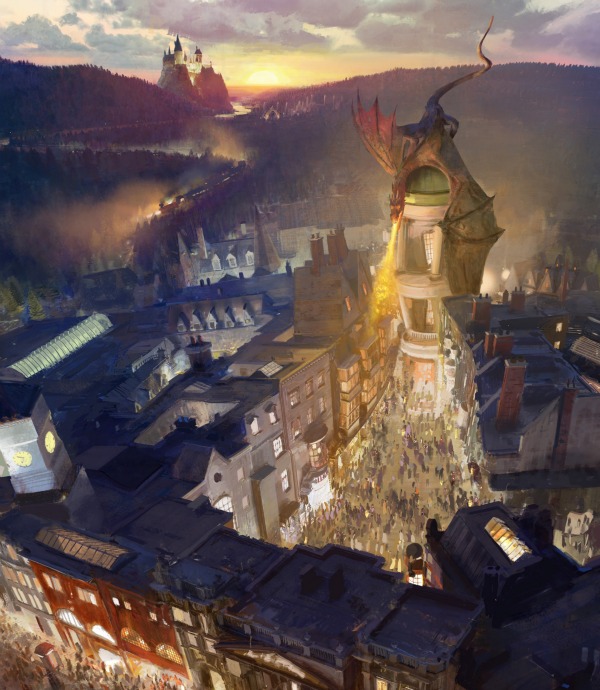 The new Diagon Alley & London attraction will actually be a multi-park experience that will expand The Wizarding World of Harry Potter across both Universal Orlando theme parks.  Diagon Alley and ‘London’ will be located within the Universal Studios Florida theme park,  which is adjacent to Universal’s Islands of Adventure theme park, where guests currently experience Hogwarts and Hogsmeade at the existing “Wizarding World of Harry Potter.”

With the new expansion at Universal Orlando,  guests will be able to travel between ‘London’ and Hogsmeade aboard the Hogwarts Express just like the characters do in the Harry Potter books and movies.

When Diagon Alley is complete, it will feature shops, a restaurant and an innovative, marquee attraction based on Gringotts bank. As always, everything will be directly inspired by the fiction and films.

Looks like we’ll be scheduling a visit to Universal Orlando in 2014 as I can’t wait to check out this new experience.

More details on The Wizarding World of Harry Potter – Diagon Alley will be released over time.

To bring Diagon Alley and ‘London’ to life, Universal’s creative team is working closely with Warner Bros. and the production design team from the Harry Potter films – just as it did for Hogwarts and Hogsmeade.

“I’m so pleased that The Wizarding World of Harry Potter has proved so popular to date, and I’m sure that the attention to detail in creating the new DiagonAlley area will make this an even better experience,” said J.K. Rowling.

“We are continuing the journey and adding an entirely new level of adventure,” said Tom Williams, Chairman of Universal Parks & Resorts.  “And we are bringing the same drive, commitment, enthusiasm and innovation to this project as we did to the first.”

“We are thrilled to offer the legions of fans the opportunity to embark on this new journey and experience Diagon Alley as it was brought to life in the books and films,” said Brad Globe, president, Warner Bros. Consumer Products.

The Wizarding World of Harry Potter – Hogsmeade opened at Universal’s Islands of Adventure in June 2010 as a fully immersive Harry Potter themed environment – bringing to life the bestselling books by J.K. Rowling and the blockbuster feature films from Warner Bros.  Since that time, it has become a global phenomenon, entertaining millions of people from around the world.

Visitors to The Wizarding World of Harry Potter are swept into the adventures of Harry Potter.  They can tour Hogwarts castle, shop in Hogsmeade and dine at the Three Broomsticks.  They can soar above Hogwarts with Harry, be chosen by a wand at Ollivanders, sample Butterbeer and much more.