Spring cleaning is like instinct. Here are my 5 Spring Cleaning Tips. With warm weather just around the corner, I find myself tackling all kinds of cleaning activities as the prospect of spring just motivates me! 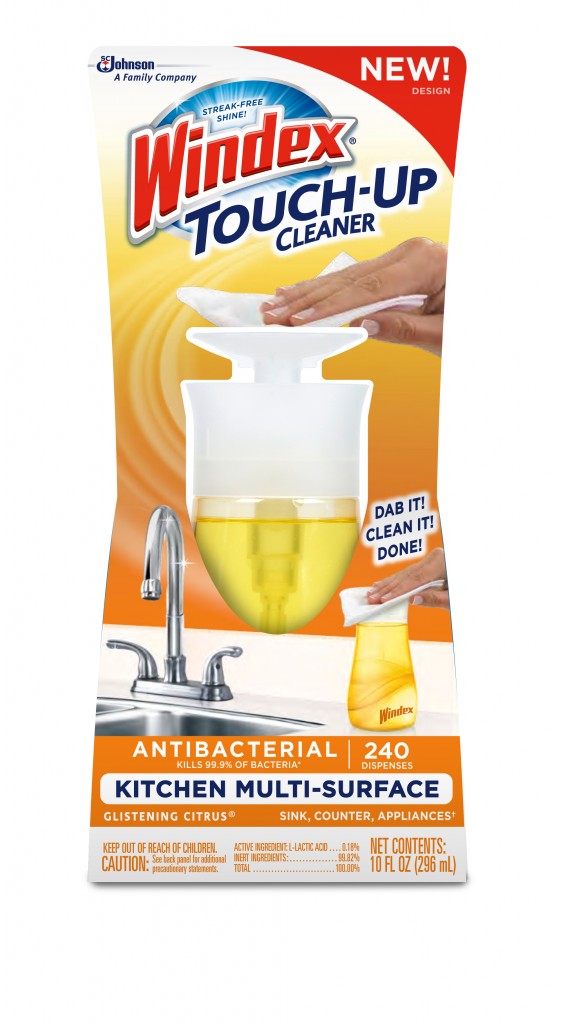 Giveaway Prize Package is for 2 winners and includes:

How to enter: Answer the question “Why do you need this product in your home?” in the comments section of my web page.

3. Tweet the following for an entry: “I’m hoping to win the Windex Touch Up Cleaner giveaway from @ClassyMommy”

*If you are a winner, please leave a testimonial here once you’ve tried it out!*

Check out the Windex® Shineboard on the official Windex® Facebook Page at www.Facebook.com/Windex or visit www.Windex.com to learn more about the Windex® Touch-Up Cleaner.

Note: I have partnered with Windex® and am being compensated for my posts. However, my opinions are my own.

NO PURCHASE OR PAYMENT POST OF ANY KIND IS NECESSARY TO ENTER OR WIN. A PURCHASE OR, PAYMENT WILL NOT INCREASE YOUR CHANCES OF WINNING.

1. Eligibility: Classy Mommy’s Windex® Touch-Up Product Giveaway (“Sweepstakes”) is open only to legal residents of the fifty (50) United States (including the District of Columbia) who are at least eighteen (18) years of age.  Employees of Classy Mommy (“Sponsor”), Daniel J. Edelman, Inc., and SC Johnson & Son, Inc. and any of their parents, subsidiaries affiliated companies and their advertising and promotion agencies, as well as the immediate family (spouses, parents, siblings and children and their respective spouses, regardless of where they reside) and household members, whether or not related of each such employee are not eligible to enter or win. The Sweepstakes is subject to all applicable federal, state, and local laws and regulations.

2. Agreement to Official Rules: By participating in the Sweepstakes, entrant fully and unconditionally agrees to and accepts these Official Rules and the decisions of the Sponsor which are final and binding in all matters related to the Sweepstakes. Whether an entrant receives a prize is contingent upon fulfilling all requirements set forth herein.

4. How to Enter: During the Promotion Period, there is one way to earn an entry: 1. Leave a comment on this blog post answering the question, “Why do you need this product in your home?”

All online entries must be received (comments posted) by 5:00 p.m. PT on March 25, 2013 to be eligible.  Limit one (1) entry per person, per email address and per household, regardless of method of entry. Entries received from any person, email address or household in excess of the stated limitation will be void. Entries generated by script, macro or other automated means and entries by any means which subvert the entry process are void. All entries become the property of Sponsor and will not be acknowledged or returned. In the event of a dispute over the identity of an online entrant, entry will be deemed submitted by the authorized account holder of the e-mail address associated with the blog post and he/she must comply with these Official Rules. Authorized account subscriber is the natural person who is assigned the e-mail address by the Internet Service Provider (ISP), on-line service provider, or other organization responsible for assigning e-mail addresses.

Entrants must comply with guidelines provided by Sponsor. An entrant’s failure to comply with the terms and conditions and/or guidelines, as determined by Sponsor, may result in disqualification and all associated entries will be void. By submitting your name and email address, you agree to receive relevant promotional emails and contest follow up communications from Sponsor.

Blog posting must (i) be entrant’s own original work and reflect the true opinions and experiences of the applicable entrant,  (ii) be in English, (iii) cannot be previously published or submitted in connection with any other promotion, (iv) be in keeping with the Sponsor’s image and (v) not be offensive or inappropriate, as determined by the Sponsor in its sole discretion, nor can it defame or invade publicity rights or privacy of any person, living or deceased, or otherwise infringe upon any person’s personal or property rights or any other  third party rights. Sponsor reserves the right to remove any blog post and void the associated entry that it determines, in its sole discretion, is offensive or inappropriate, not in keeping with Sponsor’s image or that is otherwise not in compliance with these Official Rules.

By posting a blog post, each entrant acknowledges and agrees that Sponsor may obtain blog posts under this Sweepstakes or have developed on its own or through other third parties’  ideas and material and blog posts that may be similar or identical in theme, idea, format or other respects to others submitted under this Sweepstakes and/or other promotions sponsored by the Sponsor or submitted for other reasons on the website, and entrant waives any and all claims he/she may have had, may have, and/or may have in the future, that any other blog post accepted, reviewed and/or used by Sponsor may be similar to his/her blog post.

6. Winner Requirements: Potential winners will be notified by email on or about twelve (12) days from March 18, 2013. The inability to contact the potential winner within a reasonable time period, the return of the prize or prize notification as undeliverable or non-compliance with these Official Rules will result in forfeiture of prize.

Winner, by acceptance of prize, except where legally prohibited, grants permission for Sponsor and its designees to use his/her name, address (city and state), photograph, voice and/or other likeness and prize information for promotional purposes without further compensation, in all media now known or hereafter discovered, worldwide in perpetuity, without notice or review or approval.

Winner, by acceptance of prize, agrees to review the product received in the prize package and post a product testimonial on Windex.com (click on the link to be directed to the review webpage).

7. Prizes: A Spring Cleaning Prize Package including a cleaning bucket, decorative cleaning gloves, sponges, one bathroom Windex® Touch-Up Cleaner and one kitchen Windex® Touch-Up Cleaner. Approximate Retail Value of prize is $75.00 USD and will be given to two (2) selected winners. Prize is non-transferable and no substitution or cash-redemption is permitted except by Sponsor, in its sole discretion, which reserves the right to substitute the prize (or portion thereof) with one of comparable or greater value. Winner is responsible for all federal, state and local taxes (including income and withholding taxes) and any other costs and expenses associated with prize receipt and/or use not specified herein as being provided.  Prize is awarded “as is” with no warranty or guarantee, either express or implied by Sponsor. All prize details are at Sponsor’s sole discretion.

8. Release: Entrants agree to release and hold harmless Sponsor,  Daniel J. Edelman, Inc., S.C. Johnson & Son  and their respective subsidiaries, affiliates, suppliers, distributors, advertising/promotion agencies, and prize suppliers, and each of their respective parents, subsidiaries, affiliate companies and advertising and promotion agencies and their respective officers, directors, employees and agents (collectively, the “Released Parties”) from and against any claim or cause of action, including, but not limited to, personal injury, death, or damage to or loss of property, arising directly or indirectly, in whole or in part, out of participation in the Sweepstakes or receipt or use or misuse of the prize.

9. Ownership/Use of Blog Posts: By submitting a blog post, each entrant agrees Sponsor shall own the blog post submitted (including all rights embodied therein) and that it and its designees (including S.C. Johnson & Son, Inc.) may exploit, edit, modify, and distribute the blog post and all elements of such blog post, including, without limitation, the names and likenesses of any persons or locations mentioned therein (including the use of the blog post for promotional purposes in connection with this Sweepstakes and for the promotion of Windex® products, except where prohibited by law), in any and all media now known or hereafter devised, worldwide, in perpetuity without compensation, permission or notification to entrant or any third party.

10. General Conditions: Sponsor reserves the right to cancel, suspend and/or modify the Sweepstakes, or any part of it for any reason, including if virus, bugs, worms, unauthorized intervention, or any fraud, technical failures or any other factor impairs the integrity or proper functioning of the Sweepstakes, as determined by Sponsor in its sole discretion.  In the event of cancellation, Sponsor reserves the right to select the winner from among all remaining non-suspect entries received as of time as such cancellation. Sponsor, in its sole discretion, reserves the right to disqualify any individual it finds to be tampering with the entry process or the operation of the Sweepstakes or to be acting in violation of these Official Rules or those of any other promotion or in an unsportsmanlike or disruptive manner and all associated entries will be void. Any attempt by any person to deliberately undermine the legitimate operation of the Sweepstakes may be a violation of criminal and civil law, and, should such an attempt be made, Sponsor reserves the right to seek damages and other remedies (including attorneys’ fees) from any such person to the fullest extent permitted by law.  Sponsor’s failure to enforce any term of these Official Rules shall not constitute a waiver of that provision. Twitter and Facebook are not affiliated in any way with the Sweepstakes.